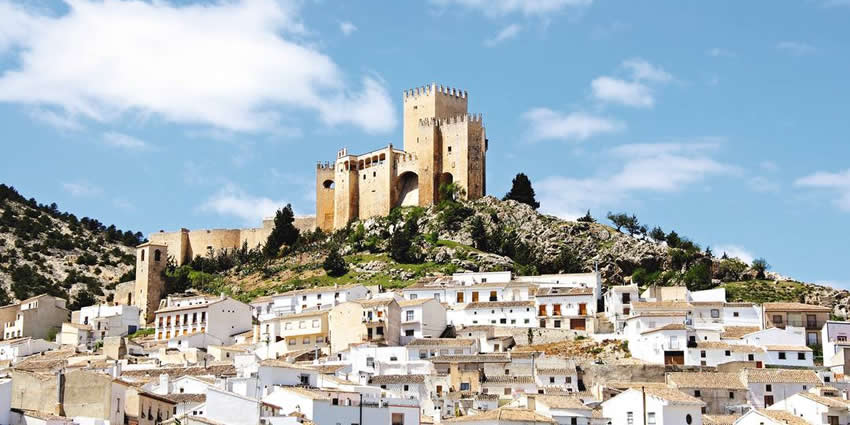 Almería is a city in Andalusia, Spain, situated in the southeast of Spain on the Mediterranean Sea. It is the capital of the province of the same name.

It was Abd-ar-Rahman III who founded the Alcazaba (the Citadel), which gave this city its name: Al-Mari’yah (المريّة, the Watchtower).

In the 10th and 11th centuries, it formed part of the Caliphate of Córdoba, and grew wealthy on trade and the textile industry, especially silk.

It suffered many sieges and fell under Christian domination in 1489.

In 1522, Almería was devastated by an earthquake and rebuilding and recovery didn’t really get underway until the 19th century.

During the Spanish Civil War, the city was shelled by the German Navy, and fell to Franco in 1939. It has since rebuilt its economy around vegetable production, with 100,000 acres of greenhouses, supplying much of Europe.

In the first century, Christian documents report that there was a town named Urci, possibly near the current site of Almería, in the Hispania of the Roman Empire. However, this is disputed, as there are several possible sites of the town. However, one Saint Indaletius, a missionary is said to have evangelized Urci and become its first bishop, is officially the patron saint of Almería.

Later, the city was refounded by Calipha Abd-ar-Rahman III of Córdoba in 955 AD. It was to be a principal harbour in his extensive domain to strengthen his Mediterranean defences.

Its Moorish castle, the Alcazaba of Almería, is the second largest among the Muslim fortresses of Andalusia, after the Alhambra.

In this period, the port city of Almería reached its historical peak. After the fragmentation of the Caliphate of Córdoba in 1031, Almería continued to be ruled by powerful local Muslim Taifa emirs like Jairan, the first independent Emir of Almería and Cartagena, and Almotacin, the poet emir. Both Jairan and Almotacin were fearless warriors, but also sophisticated patrons of the arts. A silk industry, based upon plantings of mulberry trees in the hot, dry landscape of the province, supported Almería in the 11th century and made its strategic harbour an even more valuable asset.

Contested by the emirs of Granada and Valencia, Almería experienced many sieges, including one especially fierce siege when Christians, called to the Second Crusade by Pope Eugene III, were also encouraged to attack the Muslim ‘infidels’ on a more familiar coast. On that occasion Alfonso VII, starting on 11 July 1147, at the head of mixed forces of Catalans, Genoese, Pisans and Franks, led a crusade against the rich city, and Almería was occupied on 17 October 1147.

Within a decade, however, Almería had passed to the control of the puritanical Muslim Almoravid emirs, and not until the late 15th century did it fall permanently into Christian hands. The city surrendered to the Catholic Monarchs, Fernando and Isabel, on December 26, 1489.

The 16th century was for Almería a century of natural and human catastrophes; for there were at least four earthquakes, of which the one in 1522 was especially violent, devastating the city. The people who had remained Muslim were expelled from Almería after the War of Las Alpujarras in 1568 and scattered across Spain. Landings and attacks by Berber pirates were also frequent in the 16th century, and continued until the early 18th century. At that time, huge iron mines were discovered and French and British companies set up business in the area, bringing renewed prosperity and returning Almería to a position of relative importance within Spain.

During the Spanish Civil War the city was shelled by the German Navy, with news reaching the London and Parisian press about the “criminal bombardment of Almería by German planes”. Almería surrendered in 1939, being the last Andalusian capital city to fall to Francoist forces.

In the second half of the 20th century, Almería witnessed spectacular economic growth due to tourism and intensive agriculture, with crops grown year-round in massive invernaderos – plastic-covered “greenhouses” – for intensive vegetable production.

After Franco’s death and popular approval of the new Spanish Constitution, the people of southern Spain were called on to approve an autonomous status for the region in a referendum. While the referendum were approved with 118,186 votes for and 11,092 votes against in Almería province, an absolute majority of all 279,300 registered electors was needed, and the result in Almería was just 42%. The Government impugned the result, and Almería remained part of the present autonomous region of Andalusia.

The Alcazaba, a medieval fortress that was begun in the 10th century but destroyed by an earthquake in 1522. It includes a triple line of walls, a majestic keep and large gardens. It commands a city quarter with buildings dressed in pastel colors, of Muslim-age aspect.

The Cathedral has a fortress-like appearance due to its towers, merlons and protected paths, created to defend it from Mediterranean pirates. Originally designated as a mosque, it was later converted into a Christian church, before being destroyed in the 1522 earthquake. In the 16th century it was rebuilt in the Renaissance style, whilst keeping some of its defensive features.

Renaissance church of Santiago, built in 1533, with tower and portal decorated with reliefs.

Chanca, a group of houses carved into rocks.

Castle of San Cristobal, now in ruins. It is connected to the Alcazaba by a line of walls.