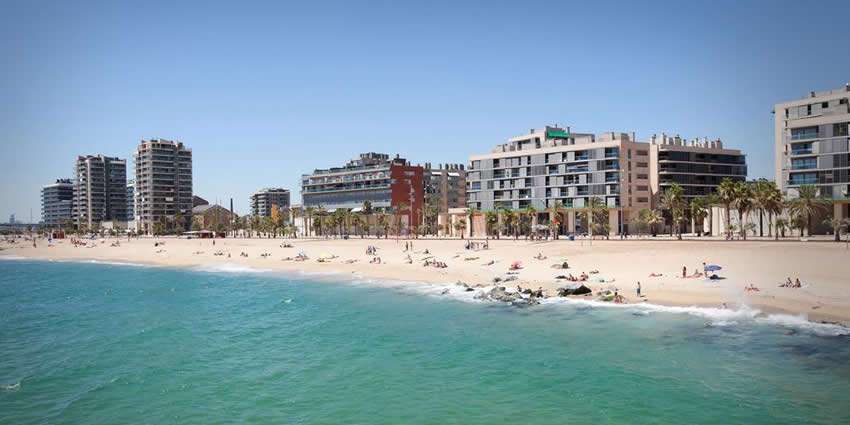 Badalona is a municipality to the immediate north east of Barcelona in Catalonia, Spain.
It is located on the left bank of the small Besòs River and on the Mediterranean Sea, in the Barcelona metropolitan area.

By population, it is the third largest in Catalonia and the twenty-third in Spain.

Badalona was founded by the Romans in the 3rd century BC, with the name of Baetulo, although human settlements in the area existed from 3500-2500 BC.

The Iberians had fortified villages on the Melasas and Boscà hills since the 7th century BC.
The Roman town’s plan was based on their common scheme of the cardo and decumanus, occupying some 11 ha, with a line of walls measuring 413×261 m and having large defensive towers.

The current Badalona was formed in the 10th century, as a new urban nucleus built over and around the old Roman city. It comprised a group of houses built around the square and the church. At the same time, a rural nucleus grew up outside the town walls. This rural and urban dichotomy would remain until the mid-18th century.

Sant Jeroni de la Murtra Monastery, built in the 14th century, is where the Catholic Monarchs would spend their summers. This is also where they received Christopher Columbus after his first voyage to the Americas.

Badalona was one of the most important towns during the Spanish industrialization process, from the 19th century onwards.

Today, Badalona is in the middle of a process of major urban change which will provide one of the challenges for the 21st century.

Badalona also has the second-largest Moroccan and Pakistani populations of Catalonia. Other significant communities include Maghrebis, Chinese, and Indians.

In May, in occasion of the celebration of Saint Anastasi, the patron saint of Badalona, activities and festivals are organized all around the city.

The most important celebration takes place the day before Saint Anastasi Day when, at night, people gather at the maritime promenade to participate in the popular Cremada del Dimoni (Devil-Burning) – similar to the famous Valencian Falles.

The harbor is chiefly important for its fishing and boat-building trades, while in town there are gas, chemical and mineral-oil works, as well as the manufacture of woolen and cotton goods, glass, biscuits, sugar and brandy. The surrounding fertile plains produce an abundance of grain, wine and fruit.

The city is home to the historic distillery which produces Anís del Mono, a spirit made of herbs and anise, the most famous anisette in Europe.

Badalona has a RENFE (train) station R1 from Barcelona to Mataró – Blanes, as well as a small harbour.

There are also links to Barcelona via the Barcelona Metropolitan Transport (TMB) metro (underground) and bus system, as well as the Trambesòs line.