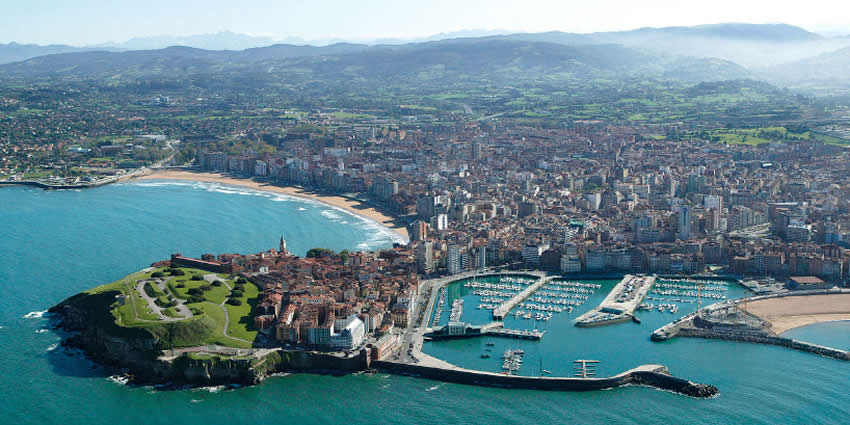 Gijón or Xixón is the largest city and municipality in the autonomous community of Asturias in Spain. It is located on the Bay of Biscay, approximately 20 km (12 mi) north of Oviedo, the capital of Asturias.

Early medieval texts mention it as “Gigia”, derived from the identical Greek and Latin term “gigias”, meaning “giant”, both of which refer to the Greek mythological giant Gigas. The medieval “Gigia” name, in turn, more specifically refers to the ancient Roman wall built on the peninsula of the Cimadevilla district of Gijon. This wall was called the “Gegionem” by the Romans and is itself a compound Latin term being either “geg-ionem”, meaning “giant-ness/gigantic”, “gegi-onem”, meaning “concrete giant”, or “gegio-nem” meaning “giant end”. Presumably the use of the term meaning “giant” referred to either the pre-Germanic Astur peoples who inhabited the area being of large physical stature or simply the largeness of the wall itself.

The first evidence of human presence in what is known nowadays as the municipality of Gijón is located in Monte Deva, where exists a series of tumulus, and in Monte Areo, where there are some neolithic dolmens. These dolmens were discovered in 1990 and were supposedly built around 5000 BC.

The first noticed settlement (Noega) is located in Campa Torres. It has its origin between the 6th and 5th centuries BC. It was populated by Astures (Cilúrnigos) and later Romanized. Noega was progressively abandoned when the Roman wall in the peninsula of Cimavilla, called the Gegionem, was built.

Despite the Barbarian invasions leaving no trace, it seems the territory was submitted to the power of the Visigoth king Sisebut in the 7th century. From this moment there appears the first Christian worship demos, where one of its places was the Roman villa of Veranes.

Gijón was capital of the Muslim territories in the Cantabric Sea, under the power of Munuza, who dominated the city between 713 and 718 or 722. In this last year, Asturians won the Battle of Covadonga, started in 718 and led by Pelagius, who would become the first King of the Kingdom of Asturias.

Until 1270 there were no reliable references to Gijón as a settlement, with only short mentions in some documents. In this year, Alfonso X of Castile conceded the category of puebla.

In the 14th century, the war between Alfonso Enríquez of Castile and Henry III of Castile finished with the village of Gijón fenced, burned and totally destroyed, practically disappearing.

In the 15th and 16th centuries, Gijón was again developed. A new dock was built in the port adding fishing and commerce to the area.

In the 17th and 18th centuries Gijón started to have great development, growing out of the old city center. This happened when the port of Gijón had commerce with the American colonies. In the 18th century, due to the French invasions, the wars and the financial trouble in the era, the development stopped until late in the century, when the Oviedo-Gijón road was created and the port was recognized as the best one in Asturias, favouring the start of industrial activities in the village.

The 19th century brought with it great development, with the commerce of coal, the Gijón–León road and later the Langreo–Gijón railway. All this supposed the quick expansion of the port, due to the heavy traffic intensity in it. A new port, El Musel, was built in 1893 and it was the first coal port of the peninsula.

Gijón was going through a conversion to an industrial village with a new bourgeois and an urban development, opening new streets and squares, with new municipal equipments like water, garbage collection, lighting, and so on. All this industrial development brought new manpower to the city and the creation of new neighbourhoods like Natahoyo, La Calzada, Tremañes or El Humedal.

In the 20th century, with the Spanish Civil War, the city supported the Republican faction. The army was located in El Coto. The resistance was eliminated in August 1936. Later, the village was the capital of the Sovereign Council of Asturias and León until 20 October 1937, when the troops of General Francisco Franco occupied the city.

The last decades of the century brought an industrial crisis affecting mainly the ferrous metallurgy and the local shipbuilding. This facts brought new terrain for the creation of new beaches, parks and new neighbourhoods. It was also created a campus of the University of Oviedo.

The city is situated on the coast of central Asturias, from sea level to an altitude of 513 metres at Picu Samartín and 672 metres at Peña de los Cuatro Jueces, bordered on the West by Carreño, the East by Villaviciosa, and to the South by Siero and Llanera

The city is situated along the Asturian coast and is distinguished by the peninsula of Cimavilla (the original settlement) which separates the beach of San Lorenzo and adjacent neighbourhoods to the east from the beaches of Poniente and Arbeyal, the shipyards, and the recreational port and the Port of El Musel to the west. It is close to the other main Asturian cities, Oviedo and Avilés.

Gijón has a temperate oceanic climate typical of the Atlantic coast of Spain, with cool summers and wet and mostly mild winters. The onshore flow from the Atlantic Ocean creates a cool summer and mild winter climate where severe heat and very cold temperatures are rare. The narrow temperature range is demonstrated by the record August temperature being only 6.4 °C warmer than the all-time record January temperature. The climate is wet and cloudy by Spanish standards, but is indeed drier than other locations on the Atlantic in the country. Humidity is high year-round.

For much of the 20th century the town was heavily dependent on mature heavy industries, but at the end of the Francoism, tertiary sector employment began to expand rapidly along with the city’s population which by 2007 stood officially at 277,897 for Gijón proper, and approximately 380,000 for the total Gijón agglomeration.

The port is at the centre of many of the local businesses. Apart from directly port related activities, the economy is based on tourism, steel (Arcelor), other metallurgy, livestock rearing and fisheries.

Gijón is served by Asturias Airport, about 38 km (24 mi) from the centre of the city; it is located in the municipality of Castrillon. The airport is connected to the city by the A-8 motorway, the N-632 national highway and scheduled bus service (Alsa). It has regular flights to the following destinations: Barcelona, Brussels, Fuerteventura, Geneva, Gran Canaria, Ibiza, Lanzarote, Lisbon, London – (Heathrow, Stansted and Gatwick), Madrid, Málaga, Palma de Mallorca, Paris – Charles de Gaulle, Seville, Tenerife-South and Valencia. Operating companies are: Air France, Air Europa and Iberia.

The service offered by LD Lines has been cancelled in Gijón. The closest Ferry services are now in Santander and Bilbao. However, Gijón still has a good freight service by El Musel

Gijón currently has 21 bus lines and four more lines that work on Fridays and Saturdays night, during the months of July and August.

The city is served by the Gijón Railway Station.