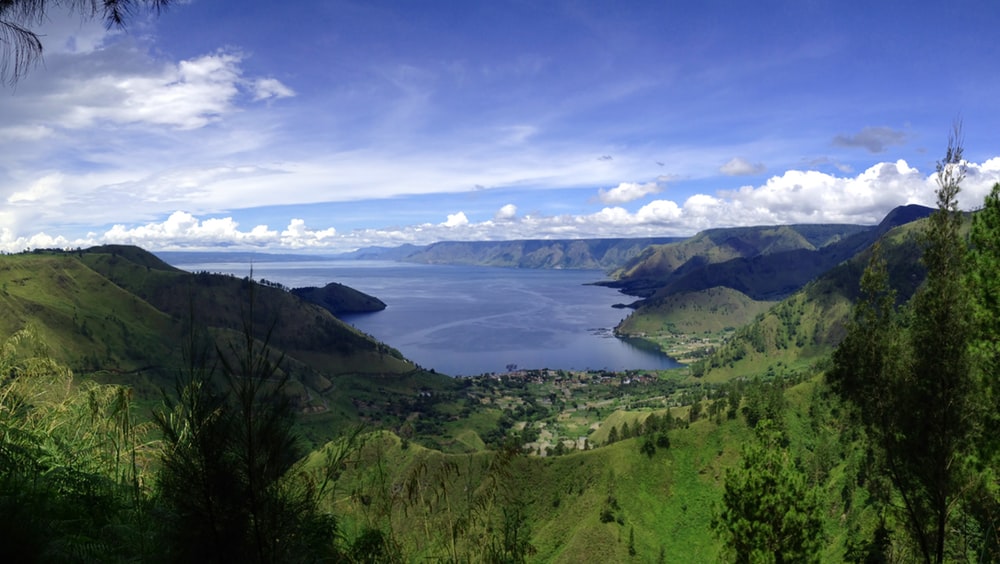 Lake Toba, in Indonesian “Danau Toba”, is a large natural lake in Sumatra, Indonesia occupying the caldera of a supervolcano.

The lake is located in the middle of the northern part of the island of Sumatra, with a surface elevation of about 900 meters. The lake is about 100 kilometers long, 30 kilometers wide, and up to 505 meters deep. It is the largest lake in Indonesia and the largest volcanic lake in the world.

Lake Toba Caldera is one of the nineteen Geoparks in Indonesia, which is proposed to be included in the UNESCO Global Geopark.

Lake Toba is the site of a massive supervolcanic eruption estimated at VEI 8 that occurred 69,000 to 77,000 years ago, representing a climate-changing event. Recent advances in dating methods suggest a more accurate identification of 74,000 years ago as the date. It is the largest-known explosive eruption on Earth in the last 25 million years. According to the Toba catastrophe theory, it had global consequences for human populations; it killed most humans living at that time and is believed to have created a population bottleneck in central east Africa and India, which affects the genetic make-up of the human worldwide population to the present.

It has been accepted that the eruption of Toba led to a volcanic winter with a worldwide decrease in temperature between 3 to 5 °C, and up to 15 °C in higher latitudes. Additional studies in Lake Malawi in East Africa show significant amounts of ash being deposited from the Toba eruptions, even at that great distance, but little indication of a significant climatic effect in East Africa.

At least four cones, four stratovolcanoes, and three craters are visible in the lake.

The Tandukbenua cone on the northwestern edge of the caldera has only sparse vegetation, suggesting a young age of several hundred years.

Also, the Pusubukit (Hill Center) volcano above sea level) on the south edge of the caldera is solfatarically active.

Since the major eruption ~70,000 years ago, eruptions of smaller magnitude have also occurred at Toba. The small cone of Pusukbukit formed on the southwestern margin of the caldera and lava domes.

The most recent eruption may have been at Tandukbenua on the northwestern caldera edge, suggested by a lack of vegetation that could be due to an eruption within the last few hundred years.

Some parts of the caldera have shown uplift due to partial refilling of the magma chamber, for example, pushing Samosir Island and the Uluan Peninsula above the surface of the lake. The lake sediments on Samosir Island show that it has risen by at least 450 m since the cataclysmic eruption.

Large earthquakes have recently occurred in the vicinity of the volcano, notably in 1987 along the southern shore of the lake at a depth of 11 km. Such earthquakes have also been recorded in 1892, 1916, and 1920–1922.

Lake Toba lies near the Great Sumatran fault, which runs along the centre of Sumatra in the Sumatra Fracture Zone. The volcanoes of Sumatra and Java are part of the Sunda Arc, a result of the northeasterly movement of the Indo-Australian Plate, which is sliding under the eastward-moving Eurasian Plate. The subduction zone in this area is very active: the seabed near the west coast of Sumatra has had several major earthquakes since 1995, including the 9.1 2004 Indian Ocean earthquake and the 8.7 2005 Nias–Simeulueepicenterse, the epicentres of which were around 300 km from Toba.