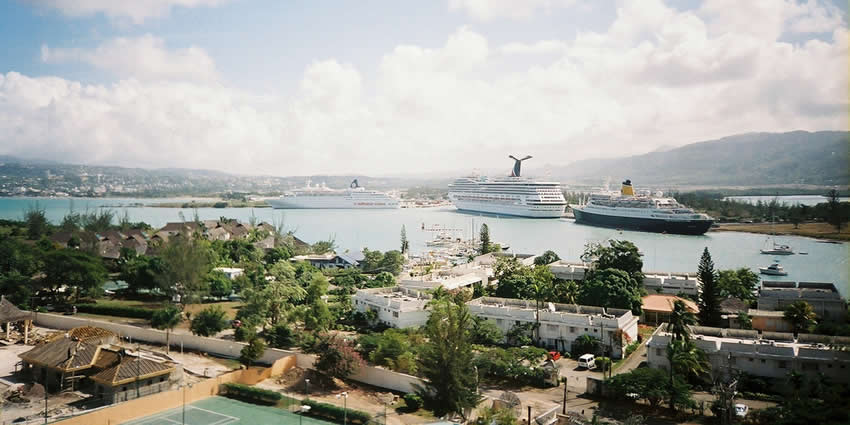 Montego Bay is the capital of the parish of St. James and is also Jamaica’s only other officially incorporated city, referred to as The Second City or more widely known as MoBay in local lingo and sometimes Bay by the locals. The city is however the fourth largest urban area by population after Kingston, Spanish Town and Portmore, all of which form the Greater Kingston Metropolitan Area, home to over half a million people. As a result, Montego Bay is the second-largest Anglophone city in the Caribbean, after primate city, Kingston.

Montego Bay is a popular tourist destination featuring duty-free shopping, a cruise line terminal and several beaches and resorts. The city is served by the Donald Sangster International Airport, the busiest airport in the Anglophone Caribbean, which is located within the official city limits. The city is enclosed in a watershed, drained by several rivers such as the Montego River.

When Christopher Columbus for the first time visited the island in 1494, he named the bay Golfo de Buen Tiempo (“Fair Weather Gulf”). The name “Montego Bay” is believed to have originated as a corruption of the Spanish word manteca (“lard”), allegedly because during the Spanish period it was the port where lard, leather and beef were exported. Jamaica was a colony of Spain from 1511 until 1655, when Oliver Cromwell’s Caribbean expedition, the Western Design, drove the Spanish from the island.

During the epoch of slavery, from the mid-17th century until 1834, and well into the 20th century, the town functioned primarily as a sugarcane port. The island’s last major slave revolt, the Christmas Rebellion or Baptist War (1831–1832) took place in the area around Montego Bay; the leader of the revolt, Samuel Sharpe, was hanged there in 1832. In 1975, Sharpe was proclaimed a national hero of Jamaica, and the main square of the town was renamed in his honor.

Montego Bay’s city status prior to British rule was debated, however, it had its city status revoked during Jamaica’s British colonial. In 1980, it was re-proclaimed a city by act of parliament, but this has not meant that it has acquired any form of autonomy as it continues to be an integral part of the parish of St. James.

Today, Montego Bay is known for its large regional hospital (Cornwall Regional Hospital), port facilities, second homes for numerous upper class Jamaicans from Kingston as well as North Americans and Europeans, fine restaurants, and shopping opportunities. The coastland near Montego Bay is occupied by numerous tourist resorts, most newly built, some occupying the grounds of old sugarcane plantations with some of the original buildings and mill-works still standing. The most famous is the White Witch’s Rose Hall which now features a world-class golf course.

The infrastructure of the city is going through a series of explosive modernizations which once completed, aims to keep Montego Bay as a top destination in the region. The Montego Bay Convention Centre, built on a large site near to the Rose Hall estate, was opened by Jamaican Prime Minister Bruce Golding on 7 January 2011.

The majority of the city’s population is of African descent. The city is also home to sizeable minority ethnic groups such as the East Indians and Chinese, who came to the country as indentured servants in the mid-to-late 19th century. The Chinese especially occupy important roles in the city’s economy especially in retail where Downtown Montego Bay is home to many shops and supermarkets owned by Chinese immigrants. The city’s East Indian population also play a key role as they operate many gift and jewelry shops in the city which are mostly geared to tourists.

There is also a minority of Europeans, some descending from immigrants from Germany (the city is a 90-minute drive from German settlements such as German Town in Westmoreland) and Great Britain (who own most of the land in the city from as far back as the days of the slave trade).

The city is also home to many immigrants from Hispanic countries such as Mexico, Cuba and Spain as well as many French, Russians and Italians (who mostly own homes or beachfront properties in the area).

Due to the heavy influence of Tourism and BPO, the city is also home to many Americans and Canadians, who either work in Tourism or BPO.

There are a wide variety of Christian churches in the city. Most are Protestant, a legacy of British colonisation of the island. The chief denominations are Church of God, Baptist, Anglican, Methodist, Roman Catholic, Seventh-day Adventist and Pentecostal. Afro-Christian syncretic religions such as the Rastafari movement also have a significant following. The city also has a unit of the Church of Jesus Christ of Latter-day Saints.

The city also has communities of Buddhists, Hindus and Muslims.

Montego Bay is pivotal to Jamaica’s economy. The city holds most of the weight of the country’s tourism sector. Most of the country’s visitors arrive and depart from Montego Bay’s Airport or Port. Many international companies have resorts in the city including Hyatt, Hilton Hotels, Holiday Inn, RIU Hotels, Royalton and Iberostar.The city is the home to the headquarters of international resort chain, Sandals. Recently, the Government of Jamaica, through the Ministry of Tourism, has begun to focus on bolstering the city’s entertainment and gastronomic offerings. Though the city’s airport hosts a number international chains like Auntie Annie’s, Quiznos, Nathan’s, Dairy Queen to name a few, the city itself does not have access to these restaurants. By virtue of this new focus, the city has become home to a newly established Hard Rock Café and became home to Starbucks’ first Jamaican location, at Doctor’s Cave Beach, in November 2017. The city also serves as the Head Office for Starbucks’ operations in Jamaica.

The city is also home to a thriving BPO sector. The city has call centres which cater to many Fortune 500 companies such as Delta, Amazon, Netflix and many others. In addition, Vistaprint established its only call centre in Montego Bay which located in the city’s up and coming tech park. Most of the city’s business is done in the downtown area, however, as of recent, the CBD has begun to migrate to the suburb of Fairview/Bogue which is home to the Fairview Town Centre, which is a five-minute commute from Montego Freezone, the city’s dedicated area to BPO activity. The area is mostly populated with retail & banking, most notable are Scotiabank’s new Fairview branch, The G-West building, FLOW’s first & Flagship store in the Caribbean – redesigned by retail experts, Shikatani Lacroix, and Fontana Pharmacy’s flagship store. The town centre also holds important to the city as it hosts places such as Digicel’s Corporate offices for Western Jamaica as well as many auditing, law and insurance firms. Most stores in the town centre feature modern architecture and beautiful landscaping. The town centre continues to expand at a rapid pace today and will be home to more businesses soon, some only found in Montego Bay.

The city is home to many health institutions such as the Cornwall Regional Hospital as well as the recently opened, Hospiten, a Spanish-owned, private hospital located in Rose Hall.

Education in the city can be found from Pre-K up to Tertiary. The city has many Pre-K and Basic Schools. Beyond this, the city has many Primary and Preparatory Schools. Secondary Education is also provided in the city most notable of which are the Montego Bay High School for Girls, Mount Alvernia High School—a Roman Catholic High School for Girls which shares the same crest, motto and wears a uniform similar to that of sister school of Immaculate Conception High School in Kingston, Herbert Morrison Technical School and the oldest school in the city, Cornwall College.

The North Coast Highway runs through the city of Montego Bay, with 2 lanes in each direction within the city, terminating at the Queen’s Drive and resuming at the intersection of the Alice Eldemire Drive and Barnett Street. The North Coast Highway connects Montego Bay with the North-South section of Highway 2000 (called T3), which begins at Mammee Bay in Ocho Rios, St. Ann and terminates at an interchange which leads onto the Mandela Highway in St. Catherine and into the nation’s capital, Kingston.

Another major road within the city is the B15 (Montego Bay to Falmouth) road. The city is also well served by buses, mini-busess and taxis, which operate from the Montego Bay Transport Centre.

The Government of Jamaica announced that a tolled bypass to the city has been planned to be built in order to reduce traffic congestion and travel times. The bypass is to begin at Westgate and end at Ironshore. The bypass will cost around USD $200 Million.

Montego Bay is served by Jamaica’s largest airport, the Sir Donald Sangster International Airport. The airport has the distinction of being the busiest airport in the English-speaking Caribbean, serving 3.95 million passengers in 2016.

The airport was the hub of Jamaica’s former national airline, Air Jamaica. The airline also had its Reservations, Western Jamaica Sales & Ticketing office, as well as its Vacations division in the city until its purchase by Caribbean Airlines in 2011, when they moved their offices to Kingston. The site is now the headquarters for Island Routes, a company owned by the Sandals-ATL Group, which in the past was affiliated with the airline.

The airport is served by several North American and European airlines, connecting the island with the United States, the United Kingdom, Europe and South America. The southern U.S. city of Miami can be reached within 70 minutes. The southern U.S. cities of Charlotte, Houston, Atlanta and Tampa can be reached by non-stop flights in less than three hours. Other locations like Philadelphia, New York City, Toronto, Washington D.C. and Montreal can be reached in under four hours. The airport is also one of two airports in the Caribbean (other being Havana), that has a non-stop flight to Los Angeles, allowing passengers the ability to connect to flights to Asia, Australia and Oceania. The airport has undergone major expansion since 2003, and has won awards including the coveted World Travel Award for being the Caribbean’s Leading Airport, beating airports like Punta Cana International Airport and Grantley Adams International Airport.

There is a free port and cruise line terminal on a man-made peninsula jutting into the bay.

The city was the subject of the namesake song by Bobby Bloom in 1970, which became a Top Ten hit in the United States for Bloom. It was covered by Jon Stevens in 1980 and by Amazulu in 1986, becoming minor hits for both.

Several scenes from the 1973 James Bond film Live and Let Die (in which Roger Moore appeared as Bond for the first time) were filmed around Montego Bay.

The 2002 song “Montego Slay” from the album O.S.T. by American hip-hop group People Under the Stairs is about the city.