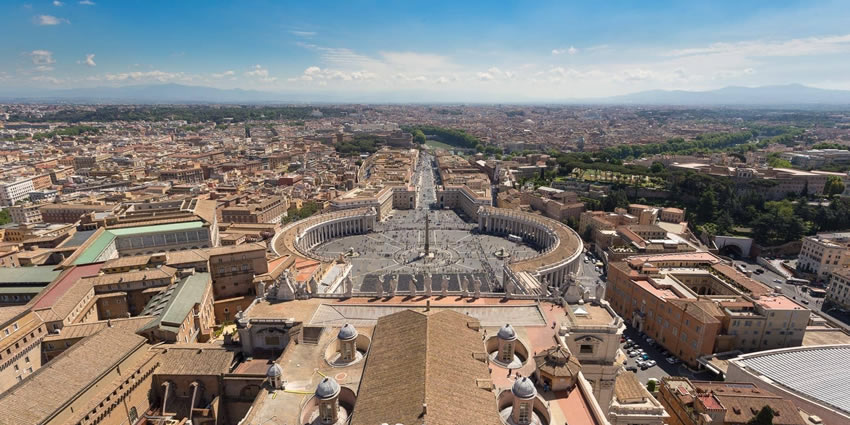 Heading to Rome, but not in the city for too long?

Don’t worry, it’s possible to see a lot of Rome in a day, and that’s just what this post is going to help you do. We’re going to focus on Rome’s highlights in this guide to help you get the most out of your day in Rome.

Here’s a quick overview of what you’ll see on your one day in Rome:

Let’s get started with a guide on how to spend 24 hours in Rome!

Rome in a day: Detailed itinerary

This one-day itinerary assumes you have a full day in Rome and are able to start sightseeing relatively early in the morning. We’re focusing on the absolute highlights of the city – attractions and sights that we think the first-time visitor will really want to focus on.

It’s a busy itinerary for a really full day, from 8.30 through to 18:00 or 19:00 pm, so definitely feel free to adjust it to meet your interests and the amount of time you have in Rome. If you have less time than a full day, you’ll need to skip a few things.

Our first stop in Rome is the Colosseum.

The Colosseum is a truly incredible building to visit. Dating from ancient Rome, it has survived through the fall of the Roman Empire, the Dark ages, the Middle Ages, the Industrial Revolution, and our current modern age.

Sure, it’s suffered a bit of wear and tear over the years, but it’s still incredibly recognizable as a giant sporting arena, and looks pretty good for a 2,000-year-old building! Touring here is a must on your first visit to Rome.

The Colosseum opens its doors at 8.30. The Colosseum is open every day, with times varying depending on the time of year.

Adjacent to the Colosseum is the Roman Forum. This was the place at the center of all Roman life – in effect, the heart of the Roman Empire.

There were temples, shrines, government buildings, speech podiums, judiciary buildings, and places of commerce. Basically, pretty much everything of import that happened in the Roman Empire would have happened here in some form or another!

Today the Forum is a large sprawling area consisting of many ruined structures in various states.

There’s a great deal to see here, although we’d suggest trying to limit your time to around an hour to 90 minutes so as to allow you to see what else you have planned for your day in Rome.

The Forum is open every day.

From the Roman Forum, our suggestion is to take a walk through Rome’s historical center. Whilst you won’t have time to explore all these locations in depth, there are plentiful opportunities for a photo.

Some of the highlights we suggest you check out as you head towards the Vatican City from the Roman Forum are laid out below, in the order that you will encounter them.

As you walk away from the Roman Forum, the first major building you will likely notice is the giant Altare della Patria, also known as the Monumento Nazionale a Vittorio Emanuele II.

This was built to honor Victor Emmanuel, the first King of unified Italy since the 6th century, who was crowned as such in 1861. With a total area of 17,000 square meters, this is quite the monument and one you are sure to spot.

Those Romans sure knew a thing or two about construction.

The Pantheon, which is your next stop, is an excellent example of this. Completed around 126 AD, this former temple has been in continuous use, and to this day the roof is still the largest unreinforced concrete dome in existence.

As well as the incredible architecture, the Pantheon is the last resting place of a number of notable folks, including the painter Raphael.

Again, you don’t have much time to dally, but you should probably pop in quickly anyway, as it’s free to do so!

Side note, you might be hungry by now. There are lots of places to dine in this area, although do be mindful of time.

Just a few minutes from the Pantheon is the world-famous Trevi Fountain, probably one of the most visited and photographed fountains in the world. Visiting this fountain in the middle of the day is likely to be a crowded affair, but to be honest, there is always a crowd here!

Still, the fountain is over 80 feet high and over 160 feet wide, so you’re still likely to be able to see it, regardless of how busy it is. It’s been attracting visitors since 1762, many of whom today throw a coin into the fountain for luck.

There’s so much to see in the old historical part of Rome, but we’re on a mission here. Our next stop is the Spanish Steps.

This 135-step stairway leads from Piazza Spagna up to Piazza Trinità dei Monti, where you’ll find the Trinità dei Monti church. Having your photo taken whilst on the Spanish Steps is pretty much an essential part of your day in Rome.

Note that as of August 2019, it’s no longer permitted to sit on the Spanish Steps as they have been classified as a monument, and there is the potential of being fined if you do so. So stick to standing on them instead!

Our last stop as we head towards the Vatican Museums is the Castel Sant’Angelo, which sits on the bank of the river Tiber, and has done for around 2,000 years.

Originally built as the mausoleum for Emperor Hadrian, this massive cylindrical building has since seen many uses, from fortress to castle to prison. Today, it’s a museum, and the views from the top are impressive.

Again, you don’t have time to visit if following this itinerary, but this is well worth a look from the outside nonetheless!

You’ve now made it to the Vatican Museums inside Vatican City, for the second half of your day.

The Vatican Museums are vast – certainly one of the largest museums in the world. There are over seven kilometers of corridors spanning 54 galleries, and with 20,000 works of art on display, there’s no shortage of content to keep you busy.

Suffice it to say, an afternoon, or even a day, is unlikely going to be enough to fully appreciate what is on display.

Some pre-planning, an audioguide, or a guided tour like this one, are good options to make sure that you see some of the absolute highlights of the Vatican Museums collection.

These include the Map Room, paintings by Da Vinci, Raphael & Caravaggio, marble sculptures, and much, much more, including our next stop.

Note, the Vatican is closed on Sundays and some other days – you can see all opening times and days on the official website.

Within the Vatican, Museum complex is the Sistine Chapel (entry is included with the Vatican Museum entry), whose ceiling and Last Judgement painting are generally regarded as one of Michaelangelo’s greatest works, and the greatest Renaissance works.

The sheer scale of the work is quite mind-boggling. Over many years, Michelangelo painted over 5,000 square feet of frescoes on the ceiling, which depict various biblical scenes, such as The Creation of Adam and the Story of Noah.

The wall above the altar is reserved for the massive Last Judgement painting, which depicts the second coming of Christ on the final day, where the souls of humanity are judged and sent to their fate.

This is another awe-inspiring installation that has to be seen to be believed.

As a side note, there’s no photography allowed in here, and there are guards who will enforce this rule.

Lots of people break it, but we have seen people escorted out for doing so. It’s also usually very busy, both here and in the Vatican Museums in general, so do be prepared for that.

Our last stop on our tour of Rome’s highlights is St. Peter’s Basilica, arguably the most important church in the Roman Catholic faith.

Built in the early 17th century, and designed by Renaissance masters including Michelangelo, Bramante, and Bernini, this is the largest church building in the world and is said to be the home of the tomb of Saint Peter.

As you might imagine, this is a major site of pilgrimage for Catholics from all over the world, and the Pope holds large masses here on a regular basis. There’s a lot to see inside, plus you can head all the way up to the roof for incredible views across the city.

The last entry is usually 75 minutes before closing.

What about a Rome guided tour?

Rome is an easy city to get around, with multiple public bus routes as well as metro and taxi services. The city center is also easily walkable. For our itinerary, the main section you might want to use transport for would be to get from the Roman Forum across to the Vatican.

In our itinerary, our suggestion is to actually walk this route.

Whilst this will take around an hour, the route we suggest would take you through the historic center of Rome, and let you see some of Rome’s most famous attractions, including the Pantheon, Trevi Fountain, and Spanish Steps.

Of course, depending on time and your personal preference, you might prefer to just head straight to the Vatican, and skip these, so you have time to explore the Vatican.

In which case, the fastest option will definitely be to take a taxi, which will take in the region of 15 – 20 minutes, depending on traffic. Public transport, either bus or metro, will take around 40 minutes.