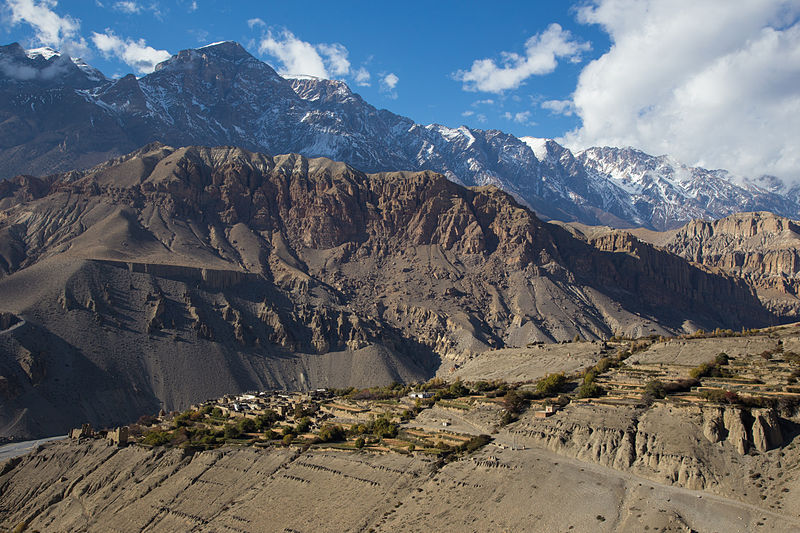 Mustang (“fertile plain”), formerly Kingdom of Lo, is a remote and isolated region of the Nepalese Himalayas.

The Upper Mustang was a restricted demilitarized area until 1992 which makes it one of the most preserved regions in the world, with a majority of the population still speaking traditional Tibetic languages.

Tibetan culture has been preserved by the relative isolation of the region from the outside world. Life in Mustang revolves around tourism, animal husbandry and trade.

The southern third of the district is called Thak and is the homeland of the Thakali, who speak the Thakali language, and whose culture combines Tibetan and Nepalese elements.

Mustang’s status as a kingdom ended in 2008 when its suzerain Kingdom of Nepal became a republic. The influence of the outside world, especially China, is growing and contributing to rapid change in the lives of Mustang’s people. The development works are increasing there day by day with a higher pace.

Mustang was once an independent kingdom, although closely tied by language and culture to Tibet.

From the 15th century to the 17th century, its strategic location granted Mustang control over the trade between the Himalayas and India.

At the end of the 18th century, the kingdom was annexed by Nepal and became a dependency of the Kingdom of Nepal since 1795.

Kingdom of Lo Manthang supported Tibet and the Qing Empire during the Sino-Nepalese War.

Though still recognized by many Mustang residents, the monarchy ceased to exist on October 7, 2008, by order of the Government of Nepal.

The last official and later unofficial king (raja or gyelpo) was Jigme Dorje Palbar Bista (1930–2016), who traced his lineage directly back to Ame Pal, the warrior who founded this Buddhist kingdom in 1380. Ame Pal oversaw the founding and building of much of the Lo and Mustang capital of Lo Manthang, a walled city surprisingly little changed in appearance from that time period.

In 2007, a shepherd in Mustang discovered a collection of 55 cave paintings depicting the life of the Buddha.

The population of the whole Mustang District in 2001 was 14,981, spread between three towns and approximately thirty smaller settlements. The inhabitants are either Thakalis, Gurung or, in traditional Mustang, primarily Tibetan.

Most of the population of Mustang lives near the Kali Gandaki River, 2,800 to 3,900 m above sea level.

The tough conditions cause a large winter migration into lower regions of Nepal.

The administrative center of Mustang District is at Jomsom (eight kilometres south of Kagbeni) which has had an airport since 1962 and has become the main tourist entry point since Mustang was opened to western tourism in 1992.

The main hydrographic feature of Mustang is the Gandaki River. The river runs southward towards Nepal Terai, bisecting Mustang.

Routes paralleling the river once served as a major trade route between Tibet and India, especially for salt.

Part of the river valley in the southern Mustang District forms the Kali Gandaki Gorge, by some measures the deepest gorge in the world.

Traditional Mustang (the Lo Kingdom) is 53 km north-south at its longest, 60 km east–west at its widest and ranges from a low point of 2,750 m above sea level on the Kali Gandaki River just north of Kagbeni to 6,700 m at Khamjung Himal, a peak in southeast Mustang.

Upper Mustang is on an ancient trade route between Nepal and Tibet exploiting the lowest 4,660-metre pass Kora La through the Himalaya west of Sikkim. This route remained in use until China’s annexation of Tibet in 1950.

Mechanized access inside Nepal began with the opening of an airstrip at Jomsom at the approximate boundary between the southern Thak and northern Lo sections of the valley, which was in operation by the 1960s.

China eventually decided to revitalize trade and in 2001 completed a 20-kilometre road from the international border to Lo Manthang. Across the TAR border is Zhongba County of Shigatse Prefecture. China National Highway 219 follows the valley of the Yarlung Tsangpo River some 50 kilometres north of the border.

Meanwhile, road-building from the south was inhibited by difficulties along the Kali Gandaki Gorge to the south, but proceeded incrementally. In 2010, a nine-kilometre gap remained but the road was completed before 2015 and is suitable for high clearance and four wheel drive vehicles.

Currently, the easiest and only widely used road corridor, from Kathmandu to Lhasa—named Arniko Highway in Nepal and China National Highway 318 in the TAR—traverses a 5,125-metre pass. This is some 465 metres higher than Kora La.

Foreign visitors have been allowed to the region since 1992, but tourism to Upper Mustang is regulated. Foreigners need to obtain a special permit to enter, costing US$50 per day per person.

Most tourists travel by foot over largely the same trade route used in the 15th century.

Over a thousand western trekkers now visit each year, with over 2,000 in 2008. August and October are the peak visiting months.

Mustang is rich in Buddhist culture, similar to the area of the Tibet Autonomous Region of the People’s Republic of China. It is an alternate way to experience the Tibetan culture and landscape to the tours provided by the Chinese government.

The Tiji festival in Lo-Manthang is another popular destination for tourists in the area seeking to experience the native culture.

The first westerner in Mustang was Toni Hagen, Swiss explorer and geologist, who visited the Kingdom in 1952 during one of his travels across the Himalayas.

French Michel Peissel is considered the first westerner to stay in Lo Manthang, during the first authorised exploration of Mustang in 1964.