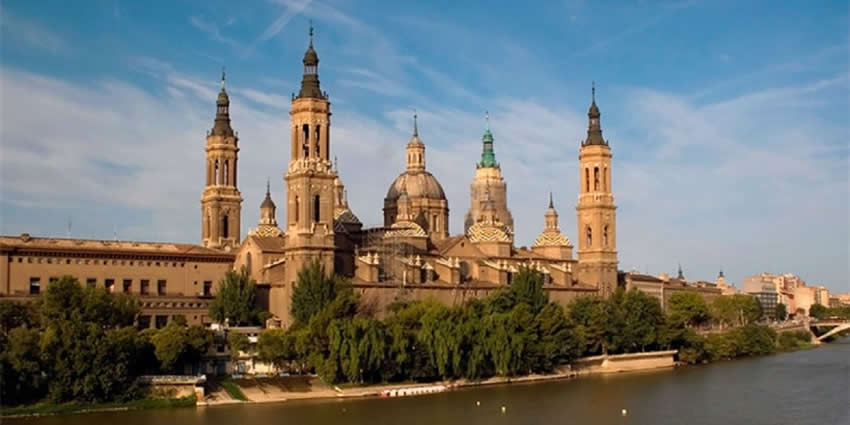 Zaragoza is the capital city of the Zaragoza province and of the autonomous community of Aragon, Spain. It lies by the Ebro river and its tributaries, the Huerva and the Gállego, roughly in the center of both Aragon and the Ebro basin.

On 1 September 2010 the population of the city of Zaragoza was 701,090, within its administrative limits on a land area of 1,062.64 square kilometres (410.29 square miles), ranking fifth in Spain. It is the 32nd most populous municipality in the European Union. The population of the metropolitan area was estimated in 2006 at 783,763 inhabitants. The municipality is home to more than 50 percent of the Aragonese population. The city lies at an elevation of 199 metres (653 feet) above sea level.

Zaragoza hosted Expo 2008 in the summer of 2008, a world’s fair on water and sustainable development. It was also a candidate for the European Capital of Culture in 2012.

The city is famous for its folklore, local gastronomy, and landmarks such as the Basílica del Pilar, La Seo Cathedral and the Aljafería Palace. Together with La Seo and the Aljafería, several other buildings form part of the Mudéjar Architecture of Aragon which is a UNESCO World Heritage Site. The Fiestas del Pilar are among the most celebrated festivals in Spain.

Christianity took root in Zaragoza at an early date. According to legend, St. Mary appeared miraculously to Saint James the Great in Zaragoza in the first century, standing on a pillar. This apparition is commemorated by a famous Catholic basilica called Nuestra Señora del Pilar (“Our Lady of the Pillar”).

The Sedetani, a tribe of ancient Iberians, populated a village called Salduie (Salduba in Roman sources). Later on, Augustus founded a city called Caesaraugusta at the same location to settle army veterans from the Cantabrian wars. The foundation date of Caesaraugusta has not been set with exact precision, though it is known to lie between 25 BC and 11 BC. The city did not suffer any decline during the last centuries of the Roman empire and was captured peacefully by the Goths in the fifth century AD.

From 1018 to 1118, Zaragoza was one of the taifa kingdoms, independent Muslim states which emerged in the eleventh century following the destruction of the Caliphate of Córdoba. During the first three decades of this period, 1018–1038, the city was ruled by the Banu Tujibi. In 1038 they were replaced by the Banu Hud, who had to deal with a complicated alliance with El Cid of Valencia and his Castilian masters against the Almoravids, who managed to bring the Taifas Emirates under their control. After the death of El Cid his kingdom was overrun by the Almoravids, who, by 1100, had managed to cross the Ebro into Barbastro, which brought Aragon into direct contact with them. The Banu Hud stubbornly resisted the Almoravids and ruled until they were eventually defeated by them in May 1110.

On 18 December 1118, the Aragonese led by Alfonso I conquered the city from the Almoravids, and made it the capital of the Kingdom of Aragon. After Alfonso’s death without heirs in 1134, Zaragoza was swiftly occupied by Alfonso VII of León and Castile. The city control was held by García Ramírez, king of Navarra, until 1136 when it was given to Ramiro II the Monk in the treaty signed at the betrothal of Ramiro’s daughter Petronila and Alfonso’s son Sancho. The wedding never happened, as Petronila ended up marrying Ramon Berenguer IV, Count of Barcelona. The marriage union was the origin of the Crown of Aragón.

13th century Zaragoza was the scene of two controversial martyrdoms related with the Spanish Inquisition: those of Saint Dominguito del Val, a choirboy in the basilica, and Pedro de Arbués, head official of the inquisition. While the reality of the existence of Saint Dominguito del Val is questioned, his “murder” at the hands of “jealous Jews” was used as an excuse to murder or convert the Jewish population of Zaragoza.

Zaragoza suffered two famous sieges during the Peninsular War against the Napoleonic army: a first from June to August 1808; and a second from December 1808 to February 1809, surrendering only after some 50,000 defenders had died.

Despite a decline in the outlying rural economy, Zaragoza has continued to grow. The General Military Academy, a higher training center of the Spanish Army, was re-established on 27 September 1940, by Minister of the Army José Enrique Varela Iglesias. During the second half of the 20th century, Zaragoza’s population boomed as a number of factories opened in the region.

In 1979, the Hotel Corona de Aragón fire killed at least 80. The armed Basque nationalist and separatist organization ETA has been blamed, but officially the fire is still regarded as accidental. ETA carried out the 1987 Zaragoza Barracks bombing in the city which killed eleven people, including a number of children, leading to 250,000 people taking part in demonstrations in the city.

Zaragoza has a mild semi-arid climate, as it lies in a wide basin entirely surrounded by mountains which block off moist air from the Atlantic and Mediterranean.

The average annual precipitation is a scanty 322 millimetres (12.7 in) with abundant sunny days, and the most rainy seasons are spring (April–May) and autumn (September–November), with a relative drought in summer (July–August) and winter (December–March).

Temperatures are hot in summer reaching up to 44.5 °C (112.1 °F), and in winter are cool, either because of the fog (about twenty days from November to January) or a cold and dry wind blowing from the northwest, the Cierzo (related to other northerly winds such as the Mistral in the SE of France) on clear days.

Frost is common and there is sporadic snowfall. The Cierzo can cause a ‘wind chill factor’ as low as −10 °C (14 °F) during cold spells.

The annual Fiestas del Pilar last for nine days, with its main day on 12 October. Since this date coincided in 1492 with the first sighting by Christopher Columbus of the Americas, that day is also celebrated as El Día de la Hispanidad (Columbus Day) by Spanish-speaking people worldwide.

There are many activities during the festival, from the massively attended Pregon (opening speech) to the final fireworks display over the Ebro; they also include marching bands, dances such as “Jota aragonesa” (the most popular dance of folklore music genre), a procession of gigantes y cabezudos, concerts, exhibitions, vaquillas, bullfights, fairground amusements, and fireworks. Some of the most important events are the Ofrenda de Flores, or Flower Offering to St. Mary of the Pillar, on 12 October, when an enormous surface resembling a cloak for St. Mary is covered with flowers, and the Ofrenda de Frutos on 13 October, when all the autonomous communities of Spain offer their typical regional dishes to St. Mary and donate them to soup kitchens.

Holy Week in Zaragoza, although not as elaborate an affair as its Andalusian or Bajo Aragón counterparts, has several processions passing through the city centre every day with dramatic sculptures, black-dressed praying women and hundreds of hooded people playing drums. It has been a Festival of International Tourist Interest since 2014.

Near the basilica on the banks of the Ebro are located the city hall, the Lonja (old currency exchange), La Seo (literally “the See” in the Aragonese language) or Cathedral of San Salvador, a church built over the main mosque (partially preserved in the 11th-century north wall of the Parroquieta), with Romanesque apses from the 12th century; inside, the imposing hallenkirche from the 15th to 16th centuries, the Baroque tower, and finally, with its famous Museum of Tapestries near the Roman ruins of forum and port city wall.

Some distance from the centre of the old city is the Moorish castle (or palace) Aljafería, the most important Moorish buildings in northern Spain and the setting for Giuseppe Verdi’s opera Il trovatore (The Troubadour). The Aragonese parliament currently sits in the building.

The churches of San Pablo, Santa María Magdalena and San Gil Abad were built in the 14th century, but the towers may be old minarets dating from the 11th century; San Miguel (14th century); Santiago (San Ildefonso) and the Fecetas monastery are Baroque with Mudéjar ceilings of the 17th century. All the churches are Mudéjar monuments that comprise a World Heritage Site.

Other important sights are the stately houses and palaces in the city, mainly of the 16th century: palaces of the count of Morata or Luna (Audiencia), Deán, Torrero (colegio de Arquitectos), Don Lope or Real Maestranza, count of Sástago, count of Argillo (today the Pablo Gargallo museum), archbishop, etc.

Museums in Zaragoza are:

Museum of Fine Arts Zaragoza, with paintings by early Aragonese artists, 15th century, and by El Greco, Ribera and Goya, and the Camón Aznar Museum, with paintings ranging from Rubens, Rembrandt, Van Dyck, Velazquez and Goya to Renoir, Manet and Sorolla.