Edinburgh of the Seven Seas 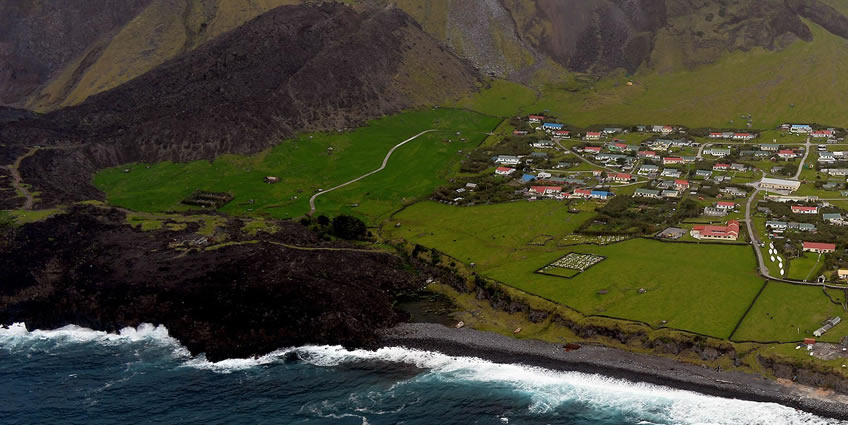 Edinburgh of the Seven Seas is the main settlement of the island of Tristan da Cunha, in Saint Helena, Ascension and Tristan da Cunha, an overseas territory of the United Kingdom, in the South Atlantic Ocean. Locally, it is always referred to as The Settlement or The Village.

Edinburgh of the Seven Seas is regarded as the most remote permanent settlement on Earth, being 2,173 kilometres from the nearest other human settlement, on Saint Helena.

The settlement was founded on the island of Tristan da Cunha in 1816 by a Sergeant Glass from the Borders of Scotland[citation needed] after the UK annexed Tristan da Cunha. A military garrison was maintained on the islands as a guard against any French attempts to rescue Napoleon, who was imprisoned on Saint Helena. The military garrison remained until the end of World War II.

It is named after Prince Alfred, Duke of Edinburgh, the second son of Queen Victoria, in honour of his visit to the island in 1867.

Edinburgh of the Seven Seas is the only major settlement of Tristan da Cunha, and contains a small port, the Administrator’s residence, and the post office. It was damaged in a volcanic eruption on the island in 1961, which forced the entire population to abandon the settlement and evacuate to Calshot, Hampshire in the UK. The eruption destroyed the settlement’s crayfish factory.

After the return of most of the islanders in 1963, the settlement was rebuilt. The harbour at Edinburgh was named Calshot Harbour, after their temporary home during the eruption.

The archipelago has a wet oceanic climate with mild temperatures, but consistent moderate to heavy rainfall and very limited sunshine, due to the persistent westerly winds.

Tristan da Cunha is a humid subtropical climate due to the lack of cold weather. The number of rainy days is comparable to the Aleutian Islands at a much higher latitude in the northern hemisphere, while sunshine hours are comparable to Juneau, Alaska, 20° farther from the equator.
Frost is unknown below elevations of 500 metres and summer temperatures are similarly mild, never reaching 25 °C. Sandy Point on the east coast is reputed to be the warmest and driest place on the island, being in the lee of the prevailing winds.

There is one road, M1, which connects the town with Patches and is used by the few private cars on the island.[8] Paved paths provide walking access to buildings around town. A bus service called Potato Patches Flier (using a 24-seat Isuzu mini school bus from South Africa) is available to pensioners in town to travel to places around the island.

All motor vehicles on the island have Tristan da Cunha plates consisting of letters TDC and 2 or 3 numbers.

The town has a small harbour with berths accessible by small vessels only.

The town is home to the island’s emergency services, which comprise one ambulance (a Toyota Hilux operated by Camogli Hospital), one fire engine (a Land Rover Defender with a small ladder) and one police car (Land Rover Series).

The town administration also has a vehicle for official use.

Places of interest and attractions

Most buildings in town are single story, with the largest being the factory and the tallest being St Joseph’s Church.

Edinburgh of the Seven Seas on Google map