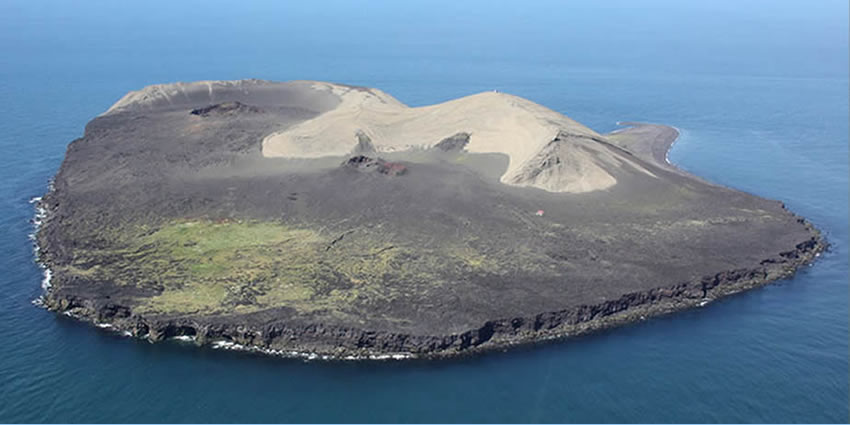 It was formed in a volcanic eruption that began 130 meters below sea level and reached the surface on 14 November 1963. The eruption lasted until 5 June 1967, when the island reached its maximum size of 2.7 square km.

Since then, wave erosion has caused the island to steadily diminish in size. As of 2012, its surface area was 1.3 km2. The most recent survey (2007) shows the island’s maximum elevation at 155 m above sea level.

The new island was named after Surtr, a fire jötunn or giant from Norse mythology. It was intensively studied by volcanologists during its eruption, and afterward by botanists and other biologists as life forms gradually colonized the originally barren island.

The undersea vents that produced Surtsey are part of the Vestmannaeyjar submarine volcanic system, part of the fissure of the seafloor called the Mid-Atlantic Ridge.

Vestmannaeyjar also produced the famous eruption of Eldfell on the island of Heimaey in 1973.

The eruption that created Surtsey also created a few other small islands along this volcanic chain, such as Jólnir and unnamed other peaks. Most of these eroded away fairly quickly.

Now what was is left of the 3,2 square km island is nothing but about 1,6 square km. It is estimated to remain above sea level for another 100 years.

The eruption was unexpected, and almost certainly began some days before it became apparent at the surface. The seafloor at the eruption site is 130 meters below sea level, and at this depth volcanic emissions and explosions would be suppressed, quenched, and dissipated by the water pressure and density.

Gradually, as repeated flows built up a mound of material that approached sea level, the explosions could no longer be contained, and activity broke the surface.

The first noticeable indications of volcanic activity were recorded at the seismic station in Kirkjubæjarklaustur, Iceland from 6 to 8 November, which detected weak tremors emanating from an epicenter approximately west-south-west at a distance of 140 km, the location of Surtsey.

Another station in Reykjavík recorded even weaker tremors for ten hours on 12 November at an undetermined location, when seismic activity ceased until 21 November.

That same day, people in the coastal town of Vík 80 km away noticed a smell of hydrogen sulfide. On 13 November, a fishing vessel in search of herring, equipped with sensitive thermometers, noted sea temperatures 3.2 km SW of the eruption center were 2.4 °C higher than surrounding waters.

At 07:15 UTC on 14 November 1963, the cook of Ísleifur II, a trawler sailing these same waters spotted a rising column of dark smoke southwest of the boat. The captain thought it might have been a boat on fire, and ordered the vessel to investigate. Instead, they encountered explosive eruptions giving off black columns of ash, indicating that a volcanic eruption had begun to penetrate the surface of the sea.

Over the next week, explosions were continuous, and after just a few days the new island, formed mainly of scoria, measured over 500 meters in length and had reached a height of 45 meters.

As the eruptions continued, they became concentrated at one vent along the fissure and began to build the island into a more circular shape. By 24 November, the island measured about 900 meters by 650 meters. The violent explosions caused by the meeting of lava and seawater meant that the island consisted of a loose pile of volcanic rock (scoria), which was eroded rapidly by North Atlantic storms during the winter.

However, eruptions more than kept pace with wave erosion, and by February 1964, the island had a maximum diameter of over 1300 meters.

The explosive phreatomagmatic eruptions caused by the easy access of water to the erupting vents threw rocks up to a kilometer away from the island and sent ash clouds as high as 10 km up into the atmosphere. The loose pile of unconsolidated tephra would quickly have been washed away had the supply of fresh magma dwindled, and large clouds of dust were often seen blowing away from the island during this stage of the eruption.

The new island was named after the fire jötunn Surtur from Norse mythology (“Surts” is the genitive case of “Surtur”, plus -ey, island).

Three French journalists representing the magazine Paris Match notably landed there on 6 December 1963, staying for about 15 minutes before violent explosions encouraged them to leave. The journalists jokingly claimed French sovereignty over the island, but Iceland quickly asserted that the new island belonged to it.

By early 1964, though, the continuing eruptions had built the island to such a size that seawater could no longer easily reach the vents, and the volcanic activity became much less explosive. Instead, lava fountains and flows became the main form of activity.

These resulted in a hard cap of extremely erosion-resistant rock being laid down on top of much of the loose volcanic pile, which prevented the island from being washed away rapidly. Effusive eruptions continued until 1965, by which time the island had a surface area of 2.5 km2.

On 28 December 1963, submarine activity 2.5 km to the northeast of Surtsey caused the formation of a ridge 100 m high on the seafloor. This seamount was named Surtla but never reached sea level. Eruptions at Surtla ended on 6 January 1964, and it has since been eroded from its minimum depth of 23 m to 47 m below sea level.

In 1965, the activity on the main island diminished, but at the end of May that year an eruption began at a vent 0.6 km off the northern shore. By 28 May, an island had appeared and was named Syrtlingur (Little Surtsey).

The new island was washed away during early June but reappeared on 14 June. Eruptions at Syrtlingur were much smaller in scale than those that had built Surtsey, with the average rate of emission of volcanic materials being about a tenth of the rate at the main vent.

The activity was short-lived, continuing until the beginning of October 1965, by which time the islet had an area of 0.15 km2. Once the eruptions had ceased, wave erosion rapidly wore the island away, and it disappeared beneath the waves on 24 October.

During December 1965, more submarine activity occurred 0.9 km southwest of Surtsey, and another island was formed. It was named Jólnir, and over the following eight months it appeared and disappeared several times, as wave erosion and volcanic activity alternated in dominance.

Activity at Jólnir was much weaker than the activity at the main vent and even weaker than that seen at Syrtlingur, but the island eventually grew to a maximum size of 70 m in height, covering an area of 0.3 km2, during July and early August 1966. Like Syrtlingur, though, after activity ceased on 8 August 1966, it was rapidly eroded and dropped below sea level during October 1966.

Effusive eruptions on the main island returned on 19 August 1966, with fresh lava flows giving it further resistance to erosion. The eruption rate diminished steadily, though, and on 5 June 1967, the eruption ended. The volcano has been dormant ever since. The total volume of lava emitted during the three-and-a-half-year eruption was about one cubic kilometer, and the island’s highest point was 174 meters above sea level at that time.

Since the end of the eruption, erosion has seen the island diminish in size. A large area on the southeast side has been eroded away completely, while a sand spit called Norðurtangi (north point) has grown on the north side of the island.

It is estimated that about 0.024 km3 of material has been lost due to erosion—this represents about a quarter of the original above-sea-level volume of the island. Its maximum elevation has diminished to 155 m.

The rate of subsidence was initially about 20 cm per year but slowed to 1–2 cm a year by the 1990s. It had several causes: settling of the loose tephra forming the bulk of the volcano, compaction of seafloor sediments underlying the island, and downward warping of the lithosphere due to the weight of the volcano.

The typical pattern of volcanism in the Vestmannaeyjar archipelago is for each eruption site to see just a single eruption, and so the island is unlikely to be enlarged in the future by further eruptions.

The heavy seas around the island have been eroding it ever since the island appeared, and since the end of the eruption, almost half its original area has been lost. The island currently loses about 1.0 hectares of its surface area each year.

This island is unlikely to disappear entirely in the near future. The eroded area consisted mostly of loose tephra, easily washed away. Most of the remaining area is capped by hard lava flows, which are much more resistant to erosion.

In addition, complex chemical reactions within the loose tephra within the island have gradually formed highly erosion-resistant tuff material, in a process known as palagonitization. On Surtsey, this process has happened quite rapidly, due to high temperatures not far below the surface.

An idea of what it will look like in the future is given by the other small islands in the Vestmannaeyjar archipelago, which formed in the same way as Surtsey several thousand years ago, and have eroded away substantially since they were formed.

The only other significant human impact is a small prefabricated hut that is used by researchers while staying on the island. The hut includes a few bunk beds and a solar power source to drive an emergency radio and other key electronics.

All visitors check themselves and belongings to ensure no seeds are accidentally introduced by humans to this ecosystem. It is believed that some young boys tried to introduce potatoes, which were promptly dug up once discovered. An improperly handled human defecation resulted in a tomato plant taking root which was also destroyed.

In 2009 a weather station for weather observations and a webcam was installed on Surtsey.