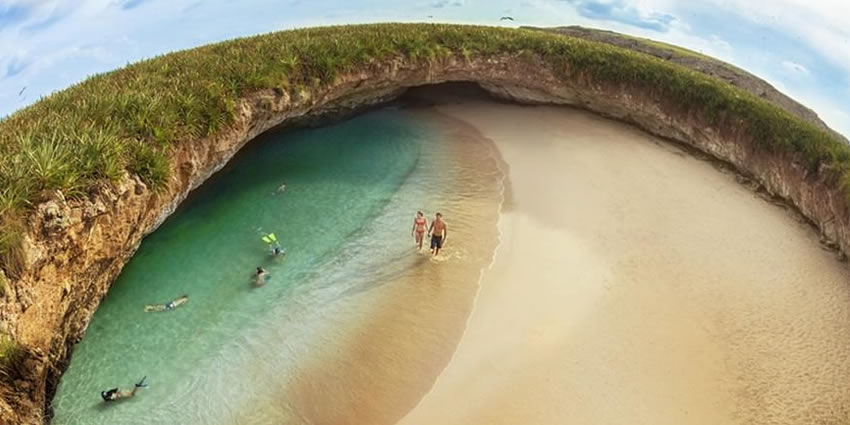 A gaping hole in the surface of the lush green island opens onto a secret beach, with ample shade, sun, and crystal-clear water.

Playa del Amor, more commonly known as the Hidden Beach, is a feature of one of the Marieta Islands – a group of small uninhabited islands a few miles off the coast of Mexico. They are very popular tourist destinations because of the abundant marine life populations due to the islands being protected from fishing and hunting by the Mexican government. The depth around the islands is between 70 and 110 feet.

Situated in a sort of open sun-drenched crater, this beach is affectionately nicknamed the “hidden beach” or “beach of love” (Playa del Amor), it is accessible only when the tide is low.

The famous beach looks like something out of a fantasy novel: a wide, sandy cavern with the blue waters of the Pacific rushing in. The islands are an archipelago, a chain of land formations formed by underwater volcano eruptions. They themselves are natural wonders, but it was something other than volcanic activity that brought the burrowed beach to light.

The Marietas Islands were originally formed many thousands of years ago by volcanic activity, and are completely uninhabited. The islands are about an hour-long boat ride west-northwest from the coast of Puerto Vallarta and are visited daily by hundreds of tourists, yet no one can legally set foot on the islands.

It is rumored that the hole that created Hidden Beach was a result of deliberate bombings. The Marieta Islands have always been completely uninhabited, making them ideal sites for military testing by the Mexican government.

Beginning in the early 1900s, weapons and artillery were tested on the Marieta Islands, a safe distance from Mexican citizens but not so safe for Marieta topography. Test bombs are the known cause for many caves and rock formations on the island, possibly including the Hidden Beach. Many bombings and large explosions took place on the islands causing amazing caves and rock formations to be created.

In the 1960s, scientist Jacques Cousteau led a protest against harmful human activity on the islands. In 2005, the islands were finally named a national park, Parque Nacional Islas Marietas, making swimming, kayaking, sunbathing, and other forms of recreation the only activity. Extensive military testing damaged flora and fauna on the island for decades, but many years of peace have replenished the islands’ pristine waters and marine life.

The Hidden Beach is invisible from the outside and is only accessible through a long water tunnel that links the beach to the Pacific Ocean. There is approximately six feet of space above water level, so visitors can arrive at the beach by swimming or kayaking. The islands remain uninhabited but are frequently visited by tourists who come to enjoy the diverse marine wildlife and the unique tropical Eden of Playa del Amor.