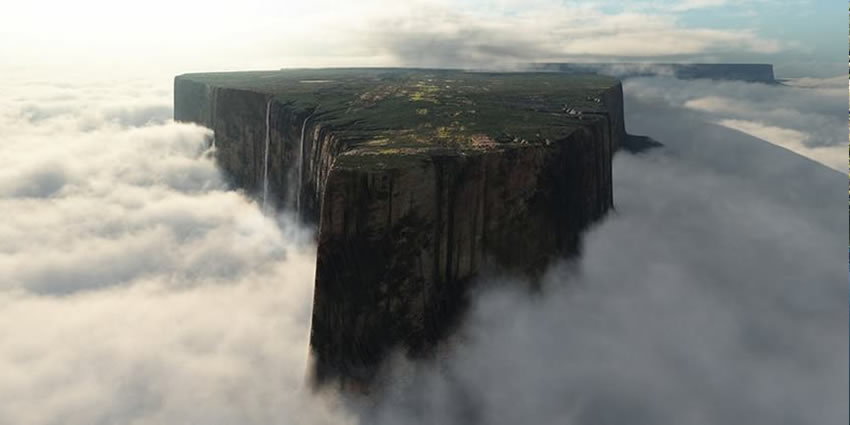 Mount Roraima, also known as Tepuy Roraima and Cerro Roraima is the highest of the Pakaraima chain of tepui plateaus in South America.

First described by the English explorer Sir Walter Raleigh in 1596, its 31 square km summit area is bounded on all sides by cliffs rising 400 meters.

The tabletop mountains of the park are considered some of the oldest geological formations on Earth, dating back to some two billion years ago in the Precambrian.

The mountain’s highest point is Maverick Rock, 2,810 meters at the south end of the plateau and wholly within Venezuela.

Many of the species found on Roraima are unique to the tepui plateaus with 2 local endemic plants found on the Roraima summit. Plants such as pitcher plants (Heliamphora), Campanula (a bellflower), and the rare Rapatea heather are commonly found on the escarpment and summit.

It rains almost every day of the year. Almost the entire surface of the summit is bare sandstone, with only a few bushes (Bonnetia roraimœ) and algae present.

Low scanty and bristling vegetation is also found in the small, sandy marshes that intersperse the rocky summit. Most of the nutrients that are present in the soil are washed away by torrents that cascade over the edge, forming some of the highest waterfalls in the world.

There are multiple examples of unique fauna atop Mount Roraima. Oreophrynella quelchii, commonly called the Roraima Bush Toad, is a diurnal toad usually found on open rock surfaces and shrubland.

It is a species of toad in the family Bufonidae and breeds by direct development. The species is currently listed as vulnerable and there is a need for increased education among tourists to make them aware of the importance of not handling these animals in the wild.

Close population monitoring is also required, particularly since this species is known only from a single location.

The species is protected in Monumento Natural Los Tepuyes in Venezuela, and Parque Nacional Monte Roraima in Brazil.

Since long before the arrival of European explorers, the mountain has held a special significance for the indigenous people of the region, and it is central to many of their myths and legends.

The Pemon and Kapon natives of the Gran Sabana see Mount Roraima as the stump of a mighty tree that once held all the fruits and tuberous vegetables in the world.

Felled by Makunaima, their mythical trickster, the tree crashed to the ground, unleashing a terrible flood. Roroi in the Pemon language means blue-green and ma means great.

Although the steep sides of the plateau make it difficult to access, it was the first recorded major tepui to be climbed: Sir Everard im Thurn walked up a forested ramp in December 1884 to scale the plateau. This is the same route hikers take today.

The only non-technical route to the top is the Paraitepui route from Venezuela; any other approach will involve climbing gear.

Mount Roraima has been climbed on a few occasions from the Guyana and Brazil sides, but as the mountain is entirely bordered on both these sides by enormous sheer cliffs that include high overhanging (negative-inclination) stretches, these are extremely difficult and technical rock climbing routes.

Such climbs would also require difficult authorizations for entering restricted-access national parks in the respective countries.

In Brazil, the Monte Roraima National Park lies within the Raposa Serra do Sol Indigenous Territory and is not open to the public without permission.