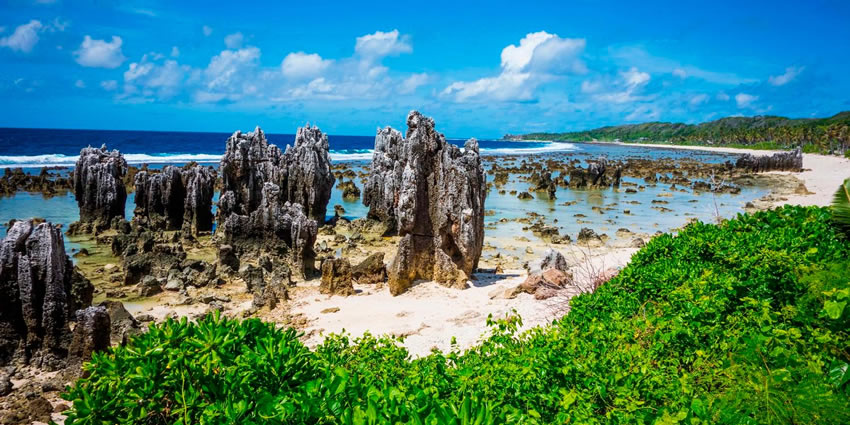 Nauru, officially the Republic of Nauru and formerly known as Pleasant Island, is an island country in Micronesia, a subregion of Oceania, in the Central Pacific.

Its nearest neighbor is Banaba Island in Kiribati, 300 kilometers to the east. It further lies northwest of Tuvalu, north of the Solomon Islands, east-northeast of Papua New Guinea, southeast of the Federated States of Micronesia, and south of the Marshall Islands.

Additionally, its population of 11,347 is the world’s third-smallest, after the Vatican and Tuvalu.

Settled by people from Micronesia and Polynesia c. 1000 BC, Nauru was annexed and claimed as a colony by the German Empire in the late 19th century.

After World War I, Nauru became a League of Nations mandate administered by Australia, New Zealand, and the United Kingdom. During World War II, Nauru was occupied by Japanese troops, who were bypassed by the Allied advance across the Pacific.

After the war ended, the country entered into a United Nations trusteeship. Nauru gained its independence in 1968 and became a member of the Pacific Community (SPC) in 1969.

Nauru is divided into fourteen administrative districts which are grouped into eight electoral constituencies and are further divided into villages.

Nauru is a 21-square-kilometer, oval-shaped island in the southwestern Pacific Ocean, 55.95 kilometers south of the equator.

The island is surrounded by a coral reef, which is exposed at low tide and dotted with pinnacles.

The presence of the reef has prevented the establishment of a seaport, although channels in the reef allow small boats access to the island.

A fertile coastal strip 150 to 300 meters wide lies inland from the beach.

The only fertile areas on Nauru are on the narrow coastal belt where coconut palms flourish. The land around Buada Lagoon supports bananas, pineapples, vegetables, pandanus trees, and indigenous hardwoods, such as the tomato tree.

Nauru was one of three great phosphate rock islands in the Pacific Ocean, along with Banaba (Ocean Island), in Kiribati, and Makatea, in French Polynesia.

Fauna is sparse on the island because of a lack of vegetation and the consequences of phosphates mining. Many indigenous birds have disappeared or become rare owing to the destruction of their habitat.

There are about 60 recorded vascular plant species native to the island, none of which are endemic. Coconut farming, mining, and introduced species have seriously disturbed the native vegetation.

There are no native land mammals, but there are native insects, land crabs, and birds, including the endemic Nauru reed warbler. The

Polynesian rats, cats, dogs, pigs, and chickens have been introduced to Nauru from ships.

The diversity of the reef marine life makes fishing a popular activity for tourists on the island; also popular are scuba diving and snorkeling.

Nauru is the least populous country in Oceania. Nauru had 11,347 residents as of July 2016, making it the second-smallest sovereign state after Vatican City.

Nauruans descended from Polynesian and Micronesian seafarers. Two of the 12 original tribal groups became extinct in the 20th century.

The official language of Nauru is Nauruan, a distinct Pacific Island language, which is spoken by 96 percent of ethnic Nauruans at home.

English is widely spoken and is the language of government and commerce, as Nauruan is not used outside of the country.

The main religion practiced on the island is Christianity.

The Constitution provides for freedom of religion. The government has restricted the religious practices of The Church of Jesus Christ of Latter-day Saints and the Jehovah’s Witnesses.

The name “Nauru” may derive from the Nauruan word Anáoero, which means ‘I go to the beach’.

Nauru was first inhabited by Micronesians and Polynesians at least 3,000 years ago.

There were traditionally 12 clans or tribes on Nauru, which are represented in the twelve-pointed star on the country’s flag.

Traditionally, Nauruans traced their descent matrilineally. Inhabitants practiced aquaculture: they caught juvenile ibija fish, acclimatized them to fresh water, and raised them in the Buada Lagoon, providing a reliable source of food. The other locally grown components of their diet included coconuts and pandanus fruit.

From around 1830, Nauruans had contact with Europeans from whaling ships and traders who replenished their supplies, particularly freshwater, at Nauru.

Around this time, deserters from European ships began to live on the island. The islanders traded food for alcoholic palm wine and firearms. The firearms were used during the 10-year Nauruan Tribal War that began in 1878.

After an agreement with Great Britain, Nauru was annexed by Germany in 1888 and incorporated into Germany’s Marshall Islands Protectorate for administrative purposes. The arrival of the Germans ended the civil war, and kings were established as rulers of the island. The most widely known of these was King Auweyida.

Christian missionaries from the Gilbert Islands arrived in 1888. The German settlers called the island “Nawodo” or “Onawero”. The Germans ruled Nauru for almost three decades. Robert Rasch, a German trader who married a Nauruan woman, was the first administrator, appointed in 1890.

In 1914, following the outbreak of World War I, Nauru was captured by Australian troops. In 1919 it was agreed by the Allied and Associated Powers that His Britannic Majesty should be the administering authority under a League of Nations mandate.

The Nauru Island Agreement forged in 1919 between the governments of the United Kingdom, Australia, and New Zealand provided for the administration of the island and for extraction of the phosphate deposits by an intergovernmental British Phosphate Commission (BPC).

The island experienced an influenza epidemic in 1920, with a mortality rate of 18 percent among native Nauruans.

In 1923, the League of Nations gave Australia a trustee mandate over Nauru, with the United Kingdom and New Zealand as co-trustees.

Japanese troops occupied Nauru on 25 August 1942. The Japanese built an airfield that was bombed for the first time on 25 March 1943, preventing food supplies from being flown to Nauru. The Japanese deported 1,200 Nauruans to work as laborers in the Chuuk islands, which was also occupied by Japan.

Nauru, which had been bypassed and left to “wither on the vine” by US forces, was finally liberated on 13 September 1945, when commander Hisayaki Soeda surrendered the island to the Australian Army and the Royal Australian Navy.

The surrender was accepted by Brigadier J. R. Stevenson, who represented Lieutenant General Vernon Sturdee, the commander of the First Australian Army, aboard the warship HMAS Diamantina. Arrangements were made to repatriate from Chuuk the 737 Nauruans who survived Japanese captivity there. They were returned to Nauru by the BPC ship Trienza in January 1946.

In 1947, a trusteeship was established by the United Nations, with Australia, New Zealand, and the United Kingdom as trustees. Under those arrangements, the UK, Australia, and New Zealand were joint administering authorities.

The Nauru Island Agreement provided for the first administrator to be appointed by Australia for five years, leaving subsequent appointments to be decided by the three governments. However, in practice, administrative power was exercised by Australia alone.

In 1964, it was proposed to relocate the population of Nauru to Curtis Island off the coast of Queensland, Australia. By that time, Nauru had been extensively mined for phosphate by companies from Australia, Britain, and New Zealand damaging the landscape so much that it was thought the island would be uninhabitable by the 1990s.

Rehabilitating the island was seen as financially impossible. In 1962, Australian Prime Minister, Bob Menzies, said that the three countries involved in the mining had an obligation to provide a solution for the Nauruan people, and proposed finding a new island for them.

In 1963, the Australian Government proposed to acquire all the land on Curtis Island (which was considerably larger than Nauru) and then offer the Nauruans freehold title over the island and that the Nauruans would become Australian citizens. The cost of resettling the Nauruans on Curtis Island was estimated to be £10 million, which included housing and infrastructure and the establishment of pastoral, agricultural, and fishing industries.

Nauru became self-governing in January 1966, and following a two-year constitutional convention, it became independent in 1968 under founding president Hammer DeRoburt. In 1967, the people of Nauru purchased the assets of the British Phosphate Commissioners, and in June 1970 control was passed to the locally owned Nauru Phosphate Corporation (NPC). Income from the mines made Nauruans among the richest people in the world.

In 1989, Nauru took legal action against Australia in the International Court of Justice over Australia’s administration of the island, in particular, Australia’s failure to remedy the environmental damage caused by phosphate mining. Certain Phosphate Lands: Nauru v. Australia led to an out-of-court settlement to rehabilitate the mined-out areas of Nauru.

Angam Day, held on 26 October, celebrates the recovery of the Nauruan population after the two World Wars and the 1920 influenza epidemic. The displacement of the indigenous culture by colonial and contemporary Western influences is significant. Few of the old customs have been preserved, but some forms of traditional music, arts and crafts, and fishing are still practiced.

Independence Day is celebrated on 31 January.