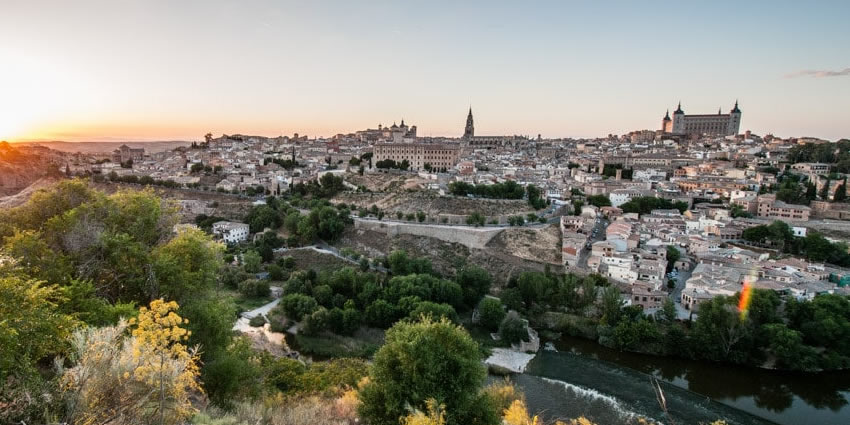 Toledo’s historic center is a UNESCO World Heritage Site, where a glorious past greets you at every turn. The old city is a cross-fertilization of Jewish, Islamic and Christian cultures, and in many buildings, you’ll see how all these influences are blended together.

You’ll gaze at sumptuous renaissance paintings and find out about the Spanish Kings who ruled an entire empire from Toledo. The rest of the time you’ll be trying to find your way around the labyrinthine streets that are enclosed by historic walls and defended by gates and fortified bridges that stand tall to this day.

Let’s explore the best things to do in Toledo:

The experts will tell you that this is the best example of High Gothic architecture in Spain.

Like many Christian buildings in Toledo and across the country, Toledo’s Cathedral is built on a Mosque (which itself had been built on a 6th-century church!).

Construction began in 1226, and the work would not be fully completed for another 250 years . So you can see a mixture of elaborate gothic and Mudéjar elements.

The cathedral has a large footprint and is one of those buildings you can get lost in as there are so many little curiosities, like the Ochavo, a 16th-century room dedicated to the martyrs and witnesses of Christ, with many opulent works of art.

Even in a city of historic buildings, this monumental 15th-century monastery stands out.

It’s set close to the Bridge of San Martín on the west side of the Casco Historico.

It was commissioned by the Catholic Monarchs, Isabella I and Ferdinand II, for several purposes: To celebrate the birth of their son Prince John, to serve as their Dynastic Mausoleum and to commemorate winning the Battle of Toro against Afonso V’s Portuguese Army, which helped them safeguard their throne.

Check out the building’s granite facade, which shows chains and manacles, representing the Christian prisoners freed by the Catholic Monarchs at the completion of the Christian “Reconquista” at Granada in the 1490s.

This northern city gate was built at the end of the 14th century and showcases the Mudéjar design that you’ll see across the city.

It’s a hefty stone portal topped by battlements and with lots of interesting little flourishes that you should take a moment to appreciate.

The walkway is a classic Moorish horseshoe archway and above this are smaller intertwined scalloped arches.

The gate gets its name from the frieze above the passageway, which shows the ordination of the Visigothic scholar Ildefonso.

On the south side of the gate there was once a moon painted here and on the north side a sun.

Entering Toledo on the San Martín bridge will make you feel a bit like a knight contemplating the medieval walls from the west.

Before you will be the Monastery of San Juan, and you can look down at the reflective green waters of the Tagus River.

The bridge was first built in the 1200s but took a lot of damage through the years, requiring rebuilds in the 1300s and 1400s.

The biggest changes were made during the reign of Charles II in the 17th-century, and the bridge, defended by crenelated towers at each end, has remained the same ever since.

The fabled 16th-century artist El Greco (a Cretan, born Domenikos Theotokopoulos), is one of Toledo’s most important historical residents and helped immortalize it with his depictions of the cityscape.

These paintings, View of Toledo and View and Plan of Toledo are both on show at this museum.

What they tell you straight away, is just how little Toledo’s outline has changed in nearly 500 years.

Of the two paintings, View of Toledo is the one that has captured the world’s imagination.

It’s a landscape with an expressive representation of the night sky above the city and the green hills around it.

On the Carretera de Circunvalación, which hugs the rim of the bluffs above the River Tagus, is this fabulous lookout that shows the city in all its glory.

You can put yourself in El Greco’s shoes when you see the Alcázar, the Cathedral, the walls and a jumble of renaissance and Mudéjar architecture, all laid out in front of you and embraced by the neat curve of the river.

The panorama at night is especially picturesque when all the main monuments are awash with orange light.

This church is one of Toledo’s baroque masterpieces.

The Jesuits got permission to settle in the imperial city in 1558, and they acquired this plot in 1569. Construction began in 1629, and the church took a century to complete, formed of more than a 100,000 bricks.

In design, it’s a powerful anti-Reformation statement, with snow-white interior walls and a layout that channels light towards the high altar for the Eucharist and leaving the side-chapels darkened.

The dome is one of the highest points in the city and stands out next to the cathedral.

Also once a mosque, you can pick this church out by its exquisite Mudéjar tower, which uses stonework from the original minaret and has beautiful scalloped arches.

Inside there’s an eye-catching blend of gothic and Moorish design, with two baroque altars and a baptismal font that dates to the 1300s.

What many people come to see though is the majestic renaissance painting, Burial of the Count of Orgaz by El Greco, which was commissioned for the church in the 1580s.

Santo Tomé was the painter’s local parish, and the Count of Orgaz had redeveloped the church in the 14th-century.

The oldest was built in the 900s by the Moors and was the main entrance to the city from the plain.

This is still standing but was later replaced by a grander gate close by.

Above the arch is a huge relief of the city’s coat of arms, and beyond the entrance is a courtyard sequestered by crenelated walls and another pair of towers.

These bear the coat of arms of the 16th-century King Charles V.

The other way across the Tagus, this bridge has been standing since the Roman era.

Naturally, Puente de Alcántara has been updated many times since then, not least because it has suffered a fair bit of war damage down the years.

The worst of this occurred in the 11th century during efforts to re-conquer Toledo from the Moors.

It was rebuilt again during the reign of Alfons X a century later.

A baroque triumphal arch was added at the bridge’s entrance in the 1700s, and standing below it you’ll have a wonderful view of the bridge’s crenelated tower framed by Toledo’s walls and Alcázar.

Toledo has Spain’s most significant Jewish building, built in the 1350s by Samuel Levi, who was treasurer to Peter of Castille.

The founder’s family had long ties to the Castilian kings, going back centuries, but this didn’t protect him from execution by Peter in 1360. The synagogue was later converted into a church, but a lot of the original character has survived.

The Sephardic Museum inside tells you all about Spain’s Jewish history, running from the 5th Century BC up to their Expulsion in the 1400s.

The city’s nerve center for many centuries, Plaza de Zocodover is still a meeting place for the people of Toledo, full of cafes and bustle.

In Moorish times this was a big horse market, where mules, ponies and mares and stallions were traded.

Later it was the site of a general market that took place every Tuesday right up to the mid-20th century when it moved to Paseo Merchán.

Plaza de Zocodover is where Auto-da-fé was enacted by the inquisition in the 15th and 16th centuries.

Nowadays you’ll be pleased to know that public ceremonies are a lot more fun, with dances, concerts and costume competitions taking place here during Toledo’s fiestas.

Mosque of Christ of the Light

Just in from the Puerta del Sol is the Casco Historico’s oldest building.

This mosque was built in 999 during the Caliphate and despite its great age looks pretty much the same as it did back then.

This makes it one of Spain’s most vital pieces of Moorish heritage.

Two centuries after its construction it became a church, and then a hermitage.

On the building’s facade, you can make out Kufic (early Arabic script) inscription that was rediscovered in the 19th century.

This tells who commissioned and constructed the building, and in which year.

Once inside, look up at the vaulting, which is just one of the many similarities with the famous mosque in Córdoba, built 30 years before.

This is the oldest intact synagogue building in Europe, dating right back to the end of the 12th century.

There hasn’t been a Jewish community in Spain since the 15th-century Expulsion.

So in the 1400s, the Mudéjar-style building became a church, although no major renovations were ever made.

It was then a monastery before being abandoned and then used as a warehouse by a company that made estoques (bullfighting swords). Take a few minutes to see the delicate capitals beneath the horseshoe arches, as well the beautiful geometric mosaics running beneath the arcades.

This bulky palace is at the highest point in Toledo, on a 550-meter hill next to the Tagus.

There has been a fortress here for at least 2,000 years but standing there now is a renaissance building from the mid-16th century.

It was meant as a royal residence for Charles V, but by the time it was finished the court had moved to Madrid and instead was where widowed queens would retire.

A quirk of the building is that all four facades are slightly different, reflecting the style in favor during different periods of the renaissance as the palace was being built.

Inside is an army museum with guns, knives, swords, medals, flags and uniforms from the 1800s onwards.