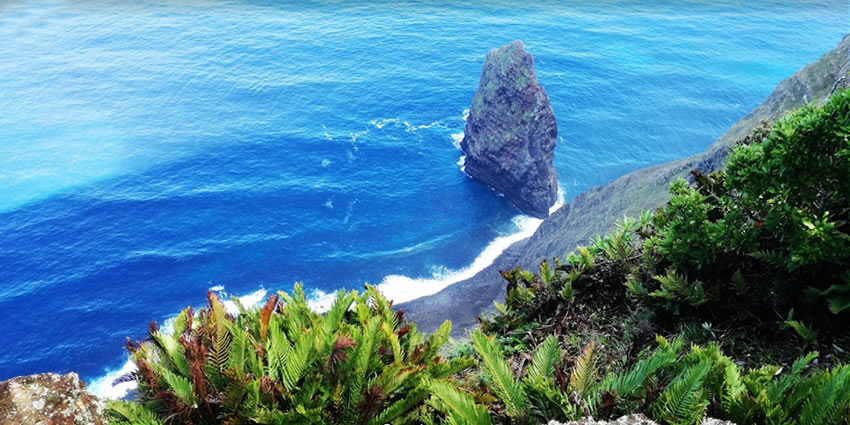 It is the more populous of the inhabited islands in the archipelago (the other being Alejandro Selkirk Island), with most of that in the town of San Juan Bautista at Cumberland Bay on the island’s north coast.

Apocalypse Island, a television documentary aired by the History Channel on 3 January 2010, was filmed on Robinson Crusoe Island. It showed two rock formations that Canadian explorer Jim Turner claimed were badly degraded Mayan statues. With no other sign of any pre-Spanish human presence on the island, however, the program has been criticized as lacking in scientific credibility.

Tourism & What to do in Robinson Crusoe Island

Robinson Crusoe has a subtropical climate, moderated by the cold Humboldt Current, which flows to the east of the island, and the southeast trade winds. Temperatures range from 3 °C to 34 °C, with an annual mean of 15.4 °C. Higher elevations are generally cooler, with occasional frosts. Rainfall is greater in the winter months, and varies with elevation and exposure; elevations above 500 m experience almost daily rainfall, while the western, leeward side of the island is lower and drier.

Robinson Crusoe Island has a mountainous and undulating terrain, formed by ancient lava flows which have built up from numerous volcanic episodes. The highest point on the island is 915 m above sea level at El Yunque. Intense erosion has resulted in the formation of steep valleys and ridges. A narrow peninsula is formed in the southwestern part of the island called Cordón Escarpado. The island of Santa Clara is located just off the southwest coast.

Robinson Crusoe Island lies to the west of the boundary between the Nazca Plate and the South American Plate, and rose from the ocean 3.8 – 4.2 million years ago. A volcanic eruption on the island was reported in 1743 from El Yunque, but this event is uncertain. On 20 February 1835, a day-long eruption began from a submarine vent 1.6 kilometers north of Punta Bacalao. The event was quite minor—only a Volcanic Explosivity Index 1 eruption—but it produced explosions and flames that lit up the island, along with tsunamis.

The Fernandezian Region is a floristic region which includes the Juan Fernández Islands archipelago. It is in the Antarctic Floristic Kingdom, but often also included within the Neotropical Kingdom. As World Biosphere Reserves since 1977, these islands have been considered of maximum scientific importance because of the endemic plant families, genera, and species of flora and fauna. Out of 211 native plant species, 132 (63%) are endemic, as well as more than 230 species of insects.

Robinson Crusoe Island has one endemic plant family, Lactoridaceae. The Magellanic penguin is also found there. The Juan Fernández firecrown is an endemic and critically endangered red hummingbird, which is best known for its needle-fine black beak and silken feather coverage. The Masatierra petrel is named after the island’s former name.

Robinson Crusoe had an estimated population of 843 in 2012. Most of the island’s inhabitants live in the village of San Juan Bautista on the north coast at Cumberland Bay. Although the community maintains a rustic serenity dependent on the spiny lobster trade, residents employ a few vehicles, a satellite Internet connection and televisions. The main airstrip, Robinson Crusoe Airfield, is located near the tip of the island’s southwestern peninsula. The flight from Santiago de Chile is just under three hours. A ferry runs from the airstrip to San Juan Bautista.

Tourists number in the hundreds per year. One activity gaining popularity is scuba diving, particularly on the wreck of the German light cruiser Dresden, which was scuttled in Cumberland Bay during World War I.

Origin of the name

The island was home to the marooned sailor Alexander Selkirk from 1704 to 1709 and is thought to have inspired novelist Daniel Defoe’s fictional “Robinson Crusoe” in his 1719 novel about the character (although the novel is explicitly set in the Caribbean, not in the Juan Fernández Islands).

To reflect the literary lore associated with the island and attract tourists, the Chilean government renamed the place Robinson Crusoe Island in 1966.

The island was first named Juan Fernandez Island after Juan Fernández, a Spanish sea captain and explorer who was the first to land there in 1574. It was also known as Más a Tierra. There is no evidence of an earlier discovery either by Polynesians, despite the proximity to Easter Island, or by Native Americans.

From 1681 to 1684, a Miskito man known as Will was marooned on the island. Twenty years later, in 1704, the Scottish sailor Alexander Selkirk was also marooned there, living in solitude for four years and four months. Selkirk had been gravely concerned about the seaworthiness of his ship, Cinque Ports (which ended up sinking very shortly after), and declared his wish to be left on the island during a mid-voyage restocking stop. His captain, Thomas Stradling, a colleague on the voyage of privateer and explorer William Dampier, was tired of his dissent and obliged. All Selkirk had left with him was a musket, gunpowder, carpenter’s tools, a knife, a Bible, and some clothing. The story of Selkirk’s rescue is included in the 1712 book A Voyage to the South Sea, and Round the World by Edward Cooke.

In an 1840 narrative, Two Years Before the Mast, Richard Henry Dana, Jr. described the port of Juan Fernandez as a young prison colony. The penal institution was soon abandoned and the island again uninhabited before a permanent colony was eventually established in the latter part of the 19th century. Joshua Slocum visited the island between 26 April and 5 May 1896, during his solo global circumnavigation on the sloop Spray. The island and its 45 inhabitants are referred to in detail in Slocum’s memoir, Sailing Alone Around the World.

During World War I, Vice-Admiral Maximilian von Spee’s German East Asia Squadron stopped and re-coaled at the island 26–28 October 1914, four days before the Battle of Coronel. While at the island, the admiral was unexpectedly rejoined by the armed merchant cruiser Prinz Eitel Friedrich, which he had earlier detached to attack Allied shipping in Australian waters. On 9 March 1915 SMS Dresden, the last surviving cruiser of von Spee’s squadron after his death at the Battle of the Falklands, returned to the island’s Cumberland Bay hoping to be interned by the Chilean authorities. Caught and fired upon by a British squadron at the Battle of Más a Tierra on 14 March, the ship was scuttled by its crew.

On 27 February 2010 Robinson Crusoe Island was hit by a tsunami following a magnitude 8.8 earthquake. The tsunami was about 3 m high when it reached the island. Sixteen people lost their lives, and most of the coastal village of San Juan Bautista was washed away. The only warning the islanders had come from a 12-year-old girl, who noticed the sudden drawback of the sea that presages the arrival of a tsunami wave and saved many of her neighbors from harm.

How to get there & Transportation