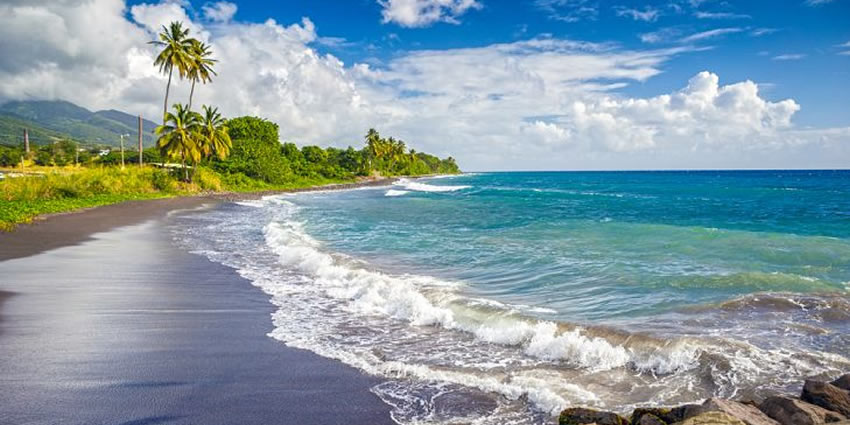 Saint Kitts and Nevis, also known as the Federation of Saint Christopher and Nevis, is an island country in the West Indies. Located in the Leeward Islands chain of the Lesser Antilles, it is the smallest sovereign state in the Western Hemisphere, in both area and population. The country is a Commonwealth realm, with Elizabeth II as queen and head of state.

The British dependency on Anguilla was historically also a part of this union, which was then known collectively as Saint Christopher-Nevis-Anguilla. To the north-northwest lie the islands of Sint Eustatius, and Saba, Saint Barthélemy, Saint-Martin/Sint Maarten, and Anguilla.

To the east and northeast are Antigua and Barbuda, and to the southeast is the small uninhabited island of Redonda, and the island of Montserrat, which currently has an active volcano (see Soufrière Hills).

Saint Kitts and Nevis is a sovereign, democratic and federal state.[18] The Queen of Saint Christopher and Nevis, Elizabeth II, is its head of state. The Queen is represented in the country by a Governor-General, who acts on the advice of the Prime Minister and the Cabinet.

The Prime Minister is the leader of the majority party of the House, and the cabinet conducts affairs of the state.

The country may also be described by the unofficial term, “Commonwealth realm” because it is a constitutional monarchy that shares the same monarch as fifteen other members of the Commonwealth of Nations.

St. Kitts and Nevis have a unicameral legislature, known as the National Assembly. It is composed of fourteen members: eleven elected Representatives (three from the island of Nevis) and three Senators who are appointed by the Governor-General.

All members serve five-year terms. The Prime Minister and the Cabinet are responsible to the Parliament.

The country consists of two main islands, Saint Kitts and Nevis. The highest peak, at 1,156 meters, is Mount Liamuiga on St. Kitts. The southernmost point is Dogwood Point on Nevis.

The islands are of volcanic origin, with large central peaks covered in tropical rainforests; the steeper slopes leading to these peaks are mostly uninhabited. The majority of the population on both islands lives closer to the sea where the terrain flattens out.

There are numerous rivers descending from the mountains of both islands, which provide fresh water to the local population. St. Kitts also has one small lake, and a salt pond.

As of 2016, there were 54,821 inhabitants; their average life expectancy is 76.9 years. Emigration has historically been very high, so high that the total estimated population in 2007 was little changed from that in 1961.

Saint Kitts was named “Liamuiga”, which roughly translates as “fertile land”, by the Kalinago who originally inhabited the island. The name is preserved via St. Kitts’s western peak, Mount Liamuiga. Nevis’s pre-Columbian name was “Oualie”, meaning “land of beautiful waters”.

Christopher Columbus upon sighting what is now Nevis in 1493 gave that island the name San Martín. The current name “Nevis” is derived from the Spanish name Nuestra Señora de las Nieves.

This Spanish name means Our Lady of the Snows. It is not known who chose this name for the island, but it is a reference to the story of a fourth-century Catholic miracle: a summertime snowfall on Esquiline Hill in Rome.

Perhaps the white clouds which usually wreathe the top of Nevis Peak reminded someone of the story of a miraculous snowfall in a hot climate. The island of Nevis upon first British settlement was referred to as “Dulcina”, a name meaning “sweet one” in Spanish.

Eventually, the original Spanish name was restored and used in the shortened form, “Nevis”.

There is some disagreement over the name which Christopher Columbus gave to St. Kitts. For many years it was thought that he named the island San Cristóbal, after Saint Christopher, his patron saint and the patron hallow of travelers.

No matter the origin of the name, the island was well documented as “San Cristóbal” by the 17th century.

The first English colonists kept the English translation of this name, and dubbed it “St. Christopher’s Island”. In the 17th century, a common nickname for Christopher was Kit or Kitt.

This is why the island was often informally referred to as “Saint Kitt’s Island”, further shortened to “Saint Kitts”.

Today the Constitution refers to the state as both “Saint Kitts and Nevis” and “Saint Christopher and Nevis”, but the former is the one most commonly used.

The national bird is the brown pelican.

The name of the first inhabitants, pre-Arawakan peoples who settled the islands perhaps as early as 3000 years ago, is not known. They were followed by the Arawak peoples or Taíno about 1000 BC.

Peak native populations occurred between 500 and 600 AD. The warlike Island Caribs invaded about 800 AD. They had expanded north of St. Kitts by the time of the Spanish conquest.

In 1623, the island was settled by the English, soon followed by the French; both agreed to partition the island. The Spanish were superior to the Kalinagos in terms of warfare,[8] and the French and English were even more “economically aggressive and militarily determined” than the Spanish.

The French and English, intent on self-enrichment through the exploitation of the island’s natural resources, understood from the start that their establishment of settlements in St. Kitts would be met with resistance, and such resistance was waged by the Kalinago throughout the first three years of the settlements’ existence.

Throughout the process of establishing settlements on St. Kitts, as elsewhere in the Caribbean, the French and the English, like their predecessors, were intent on enslaving, expelling, or exterminating the Kalinagos, since the latter’s retention of land threatened the profitability of the European-controlled plantation economy.

To facilitate this objective, an ideological campaign was waged by colonial chroniclers, dating back to the Spanish, as they produced literature that systematically denied Kalinago humanity (a literary tradition carried through the late-seventeenth century by such authors as Jean-Baptiste du Tertre and Pere Labat).

In 1626, the Anglo-French settlers joined forces to massacre the Kalinago, allegedly to pre-empt an imminent plan by the Caribs, conniving with the Kalinagos, to expel or kill; or, according to Tertre’s account, just kill the European colonialists who had maintained their presence on the island by force for three years.

As Spanish power went into decline, Saint Kitts became the premier base for English and French expansion into the Caribbean.

From St. Kitts, the British settled the islands of Antigua, Montserrat, Anguilla, and Tortola, and the French settled Martinique, the Guadeloupe archipelago, and St. Barts.

During the late-seventeenth century, France and England fought for control over St Kitts, with Brimstone Hill Fortress beginning circa 1690. The French ceded the territory to the UK in 1713.

At the turn of the eighteenth century, St. Kitts was the richest British Crown Colony per capita in the Caribbean, as a result of the sugar trade.

Although small in size and separated by only 2 miles (3 km) of water, the two islands were viewed and governed as different states until the late-nineteenth century, when they were forcibly unified along with the island of Anguilla, by the British.

To the present day, relations are strained, with Nevis accusing Saint Kitts of neglecting their needs.

Saint Kitts and Nevis along with Anguilla, became an associated state with full internal autonomy in 1967. Anguillians rebelled and separated from the others in 1977. St. Kitts and Nevis achieved independence from the United Kingdom in 1983.

It is also the newest sovereign state in the Americas. In August 1998, a vote in Nevis on a referendum to separate from St. Kitts fell short of the required two-thirds majority.

In late September 1998, Hurricane Georges caused approximately $458,000,000 in damages and property and limited GDP growth for the year and beyond. Georges was the worst hurricane to hit the region during the twentieth century.

Tourism & What to do in Saint Kitts and Nevis

Saint Kitts and Nevis is known for a number of musical celebrations including Carnival (18 December to 3 January on Saint Kitts). The last week in June features the St Kitts Music Festival, while the week-long Culturama on Nevis lasts from the end of July into early August.

The 1985 film Missing in Action 2: The Beginning was filmed in Saint Kitts.

Saint Kitts and Nevis have two international airports. The larger one is Robert L. Bradshaw International Airport on the island of Saint Kitts with service outside to the Caribbean, North America, and Europe.

The other airport, Vance W. Amory International Airport, is located on the island of Nevis and has flights to other parts of the Caribbean.