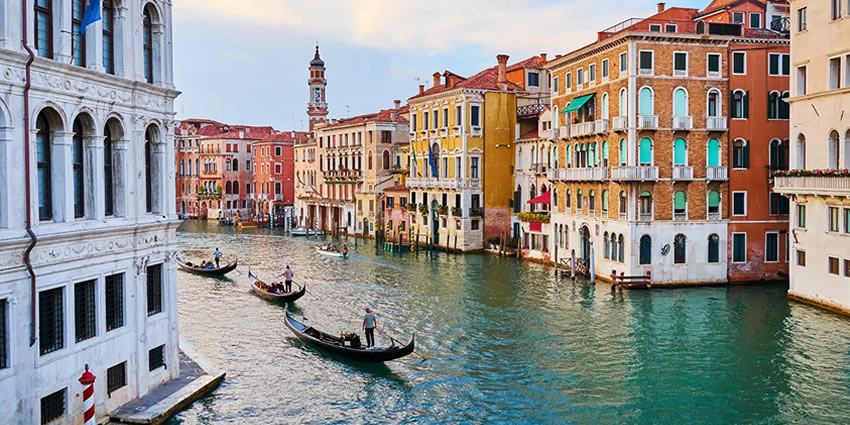 Venice is a city of immense beauty and historical significance, but it is also unique and not like any other city in Italy.

As the capital of the Veneto Region of Northern Italy, Venice actually lies on 117 small islands that are connected by a series of bridges and separated by a network of canals. With a population of around 250,000, Venice is not one of the largest cities in Veneto, but it is one of the most visited tourist destinations in the country.

During the Middle Ages and the Italian Renaissance, Venice was an extremely powerful stronghold and served as a major financial and military center. Furthermore, it was a place that saw great cultural and artistic development and was renowned worldwide.

Today, Venice remains an important economic center and is one of the most popular cities for tourism in the world – Sights like St. Mark’s Basilica and the Grand Canal draw millions of visitors to this small group of islands on an annual basis.

Let’s explore the best things to do in Venice:

Easily the most renowned and famous building in Venice, St. Mark’s Basilica is a sublime piece of architecture that has stood the test of time since its creation in 1092 and remains one of the most important religious buildings in Northern Italy.

Every aspect of this church is fantastic – From the ornate detail, sculptures, and artwork of the front facade, to the beautifully painted frescos and Byzantine works of art on the inside of the domed ceiling.

Located in the Piazza San Marco, this basilica is easily accessible from the grand canal and is one of the best-known surviving examples of Italian Byzantine architecture.

Located on the grand canal, opposite the island of San Giorgio Maggiore, this square holds huge importance in Venice and is a truly spectacular place to visit.

Surrounding the Piazza is a series of ornate buildings with arched walkways that frame it perfectly.

This square really is the perfect place to start your tour of Venice and tick off some of its most impressive sights.

Venice has literally hundreds of canals that connect the various islands that make up the city – the largest of which is the Canale Grande.

This monumental canal is more like a river and it passes from one side of Venice to the other and snakes through the center in a large S bend shape.

Over 170 buildings dating from as early as the 13th century line the banks of the canal and it has served as an important waterway in the city for hundreds of years.

Only four bridges span the grand canal as generally people and tourists travel along the canal, not over it.

Consider walking along sections of the canal, admiring the buildings that line it, and watching the busy water traffic of Venice.

As one of the bridges that span the impressive Grand Canal, the Ponte di Rialto is undoubtedly the most famous and iconic.

Connecting the San Marco and San Polo districts of Venice, the bridge is an important pedestrian thoroughfare, but also a hugely popular tourist attraction.

Originally a wooden bridge, this culmination stood for hundreds of years until it collapsed in 1524. After this incident, an ornate stone bridge was built that still stands today.

The detail and design of the bridge are simply beautiful and its symmetry perfectly frames the grand canal.

Furthermore, the is also a series of shops on the bridge that sell a range of wares from souvenirs to jewelry.

Located opposite the Ponte dell’Accademia on the Grande Canal, this museum hosts a fine collection of pre-19th century art and features works by artists such as Bellini, Canaletto, and Titian.

The building that the gallery is housed in was formerly a convent and was converted to the museum in the mid to late 1700s.

For those who love Renaissance art and iconic masterpieces, this gallery delivers.

Possibly its best-known piece is the Vitruvian Man by Da Vinci which shows the ideal proportions of man.

Other notable works include the Resurrection by Tintoretto, Virgin and the Child by Titian, and the Battle of Lepanto by Veronese.

If you are looking for a spot of relaxation and to get away from the bulk of the tourists, the Lido is the place to go.

This separate island creates a barrier between Venice and the Adriatic Sea and features a long stretch of beautiful beaches to enjoy.

Home to approximately 20,000 inhabitants, the Lido also has a host of residential areas, shops, restaurants, and hotels.

With a much calmer, laid-back, and relaxed feeling to central Venice, Lido is a true escape and provides a stark contrast to the busy streets and waterways surrounding the grand canal.

One of the most renowned buildings in Venice aside from the Basilica and Campanile, Doges Palace also sits in St. Mark’s Square but looks out onto the grand canal.

This ornate palace is simply stunning and its front facade features a beautiful arched design made of white stone with a series of diamond patterns on the walls.

Inside, the palace is just as impressive and there is a series of immensely decorated rooms that all have original details, furniture and artwork.

Tours of the palace are available and it is advised to spend some time viewing both the exterior and interior in detail to truly capture a piece of the history of Venice.

Although only a small bridge in the relative scheme of Venice, the Bridge of Sighs is one of the most viewed structures in the city and is an important historic landmark.

Passing over the Rio di Palazzo, the bridge connects the Prigioni Nuove to Doge’s Palace.

Legend has it, that as criminals were taken from the Palace over the bridge, they would cast once last glimpse at Venice and sigh; considering their forthcoming punishment and imprisonment.

Whilst visiting St. Mark’s Square, it is an absolute must to glimpse this iconic bridge too.

Ride a Vaporetto through the Grand Canal

The Vaporetto is the main form of transport in Venice – Yes you can catch a train into the main station, and yes you can walk on foot through the streets, but to truly experience Venice, you must experience it from the water! The Vaporetto system is highly efficient and is one of the quickest ways of traveling to the various islands of Venice.

You can buy extended passes that allow for multiple uses so you don’t have to worry about buying a ticket each time you use one.

During your time in Venice, try to travel on the Vaporetto’s as much as possible and enjoy the water traffic and the sights and sounds that you will encounter.

As the tallest structure in Venice, the campanile is a towering building that stands at a colossal 98.6m high.

The building that stands now, is actually a reconstruction as the original collapsed in 1902. Originally created in the 9th century, the campanile was used as a watchtower.

Throughout the years, the tower has been damaged by fire, earthquakes, and even lightning.

Made of a simple red-brick design, the main shaft is quite simple, but the bell housing and pinnacle feature a myriad of arches and stonework, and the top feature a golden statue of the Angel Gabriel.

Admire the tower from the Piazza di San Marco, but also take the elevator up to the top for possibly the best panoramic views of Venice.

This is one of the smaller separate islands that is not connected to the main canals of Venice.

San Giorgio Maggiore sits a short distance from the Venice Basin and the Grande Canal and can be reached by Vaporetto or private water taxi.

Located on the island is the fantastic San Giorgio Monastery, the Church of San Giorgio Maggiore, and the large campanile that mirrors the one standing in St. Mark’s Square.

Walk through the small harbor and see the various boats moored, visit the fantastic church and monastery, and climb the campanile for amazing views back across to the main city of Venice.

Murano is another of the islands within the Venice district – This area of land is actually made up of several small islands connected together by a series of canals and bridges (much like Venice). Murano has a wonderful charm and is often not as busy as the main areas of Venice.

This wonderful island town has numerous sights including the Basilica di Santa Maria, the Campo Santo Stefano, and the Palazzo Da Mula.

Furthermore, Murano is famous for its glass blowing and you can see live demonstrations at the various factories that are established here.

Located in the Cannaregio region of Venice, the Church of Santa Maria Assunta is a fine structure that is also known as I Gesuiti.

The front facade of the Church features several stone columns, ornate sculptured statues of religious figures, and a host of intricate detail – A huge bronze door serves as the main entrance.

Constructed in 1729, this is one of the newer churches in Venice but it is still important and the interior contains a number of impressive artworks such as the Martyrdom of St. Lawrence by Titian.

Furthermore, artwork, frescos, and gold detail cover the ceiling of the church, and some beautiful motif artwork lines the walls and columns.

Possibly the second most renowned church in Venice, the Basilica di Santa Maria della Salute sits on the opposite side of the grand canal to St.

Marks and stands out against the surrounding architecture.

With a Baroque design, this church was completed in 1687 and is designated as a minor basilica of the Roman Catholic Church.

Taking center stage on the Grand Canal, the exterior is decorated with four statues of the apostles and the main dome towers above the skyline.

The interior gives the impression of great space and the hexagonal design allows light to pour in.

Although not decorated to the same degree as other churches in Italy, this basilica has a great deal of symmetry and is truly pleasing to the eye.

If you are looking for a peaceful escape, Torcello island offers just that and is much less crowded than the main areas of Venice.

Located to the far east of the main part of Venice, Torcello is nestled behind Burano and is approximately 45 minutes from Venice via a regular ferry.

Walkthrough the main street of Torcello and admire the beautiful canal until you reach the Church of Santa Maria Assunta which has a fantastic design.

Furthermore, there is a dedicated museum that displays the history of this chain of islands, and a variety of shops and restaurants.