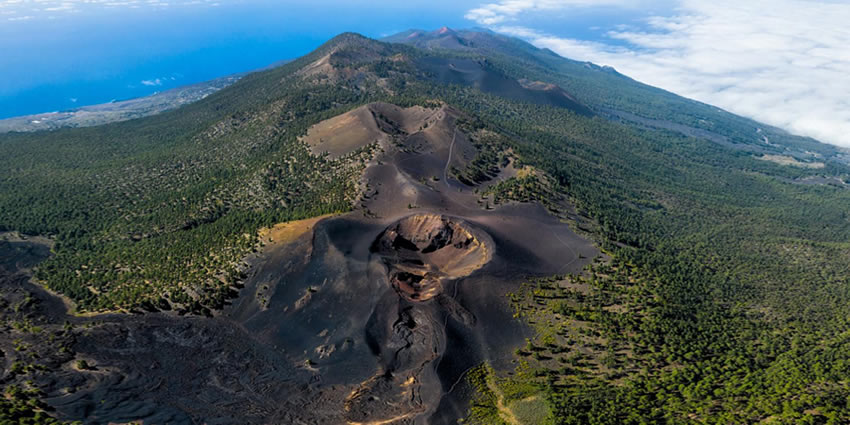 La Palma is a volcanic ocean island located on the African Plate and is currently – along with Tenerife – one of the most volcanically active of the Canary Islands.

The Cumbre Vieja meaning “Old Peak” and is an active volcanic ridge on the island of La Palma in the Canary Islands, Spain. The spine of Cumbre Vieja trends in an approximate north-south direction, and covers the southern half of La Palma, with both summit ridge and flanks pockmarked by over a dozen craters.

The latest eruption, currently ongoing, began on 19 September 2021 in a forested area of Las Mancha’s locality known as Cabeza de Vaca.
Lava flows from the new vent soon reached inhabited areas; thousands of residents were evacuated, and thousands of buildings have since been destroyed.

The eruption started on 24 June 1949, the feast day of St John, which is why in Spanish texts the eruption is referred to as la erupción del Nambroque o San Juan, which in English is “The Eruption of the Nambroque of St John’s volcano.”

During the 1949 eruption, eruptive activity was located at three vents—Duraznero, Llano del Banco, and Hoyo Negro—mild strombolian activity occurred at the Duraznero vent.

Lava erupted from the Llano del Banco vents, whilst only mild phreatomagmatic emissions occurred at the Hoyo Negro vent.

Then on 30 July – the last day of eruptive activity, lava erupted at the Duraznero fissure and vent. During the eruption on 1 and 2 July, two strong earthquakes with an estimated intensity of VIII on the Modified Mercalli Scale also occurred, the epicenter was calculated to be near Jedey.

Following the earthquakes, a fracture was noted and it had a length of approximately one and a half kilometers. It was traceable to the Hoyo Negro and Duraznero vents, making a total length of about two and a half kilometers or about 1/10 of the exposed length of the Cumbre Vieja, and parts of the western half of the Cumbre Vieja ridge had apparently moved about 1 meter sideways and 2 meters downwards towards the Atlantic Ocean.

It was only in the vicinity of the Duraznero and Hoyo Negro vents that the vertical displacement attained about 4 meters. As of 2009, the fracture is still visible and still has the same dimensions recorded in 1949.

The timeline for the eruption is as follows: The first reported seismic activity was noted on the southern rim of the Caldera de Taburiente on 23 July 1936 at about 23:30 local time, with further activity noted over the next two days.

During the following years, periodic seismic activity occurred, but due to the absence of monitoring equipment, the only reports are those recorded in the media.

Then at about 09:00 (local time) on 24 June 1949, the Duraznero vent opened with mildly explosive activity, venting of gases, and rocks; with eruptive activity continuing in this manner until 6 July.

During this phase, a strong earthquake occurred on 1 July and again on 2 July with an estimated intensity of VIII on the Modified Mercalli Scale. Visits to the summit region revealed a crack about 1.5 km long which extended in a northerly direction from the Hoyo Negro (“Black Hole”) and about 1 km south to the Duraznero vent making a total length of about 2.5 km.

This crack is the subject of research and heated debate as to whether it indicates initial failure of the western flank – or not. The later analysis placed the epicenter north of the township of Jedey.

The vents opened progressively up the ravine, forming a series of en echelon (diagonally side by side), vents. On 10 July the westward flow of lava from the Llano del Banco vents reached the coast at Puerto de Naos and entered the Atlantic Ocean, forming a lava delta, the velocity is estimated at ~14 meters per sec.

On 12 July mildly explosive activity commenced at the Hoyo Negro (Black Hole) with emissions of rocks, fumes, and some phreatomagmatic activity indicating that the eruption had encountered groundwaters. Activity at the Hoyo Negro ceased on 22 July but continued at the Llano del Banco vents until 26 July.

It finally stopped about 30m from the ocean. Also later, on 30 July all eruptive activity ceased and only residual fumarolic activity continued until 4 August; thereafter there were only thermal emissions. It is estimated that approximately 60 million cubic meters of lava have erupted during the eruption.

The process creating the earthquakes of 1 and 2 July is considered to have been driven by the pressure caused by the rising magma super-heating water trapped within the edifice of the volcano. It is unlikely that the trapped waters could vapourize due to being under considerable pressure.

What is postulated is that the waters were heated to a point where they could not absorb further thermal energy in the available space. Continuing heating required the water to expand further and the only way it could do so was to move the flank of the volcano. This caused the two earthquakes that were reported as occurring during the eruption along with the development of the crack.

That the water entrapped within the edifice did not vapourize is shown by the absence of phreatomagmatic explosions except the mildly explosive eruptive activity that occurred at the Hoyo Negro vent from 12 to 22 July: steam escaping explosively from the ground is often a precursor of volcanic activity.

Further evidence that vapourization did not occur is that when Rubio Bonelli visited the rift the following day, the newly opened fissure “… Was not issuing fumes, vapor, steam, ashes, lava or other materials …”

Due to the lack of seismic monitoring equipment on the island, any claims about the seismic activity are based upon personal observation and may not be reliable.

The 1971 eruption occurred at the southern end of the Cumbre Vieja at the Teneguía vent. The eruption was mainly strombolian in style. Lava also erupted. Seismic activity did occur before and during the 1971 eruption but was not on the scale associated with the 1949 eruption. Residual thermal emissions continue.

An earthquake swarm started under Cumbre Vieja on 11 September 2021. It slowly migrated to the surface, with earthquakes up to around 3.5 on the Richter scale, and over 25,000 recorded in the space of 10 days. On 19 September at 15:15 local time (16:15 UTC), the volcano started erupting, in Cabeza de Vaca in the Montaña Rajada mountains, in the Las Manchas section of El Paso municipality.

A yellow warning was issued, covering 35,000 people in the municipalities of Los Llanos de Aridane, Fuencaliente, El Paso, and Villa de Mazo, later raised to its highest level—red—due to the eruption. A total of around 10,000 people are expected to be evacuated from the area.