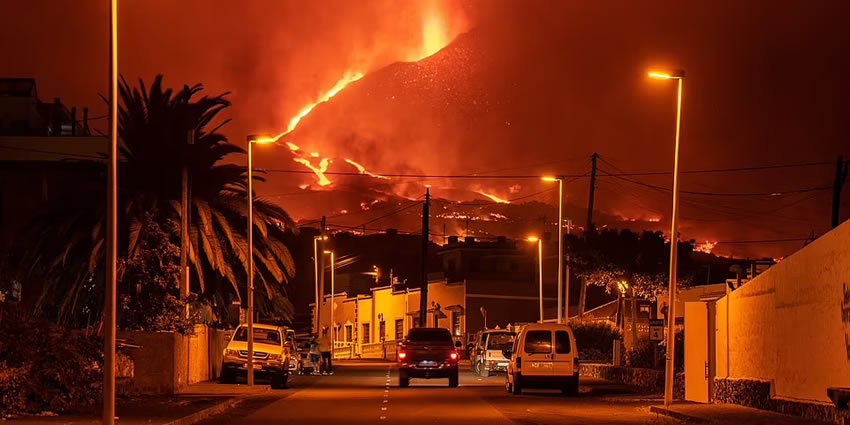 The eruption has caused the evacuation of around 7000 people, and the lava flow has covered over 670 hectares. The lava flow is about a kilometer wide and has reached the sea, destroying more than 1100 buildings, cutting the coastal highway, and forming a new peninsula.

The town of Todoque was completely destroyed by lava, which has now reached La Laguna (a town within the municipality of Los Llanos de Aridane).

The eruption source is a new vent of the Cumbre Vieja volcano which encompasses the whole southern third of La Palma. The new vent is as yet unnamed. Volcano vents on La Palma have traditionally been either given Guanche names or, more rarely and not in recent times, named after the saint on whose feast day the eruption began.

An early proposal for a Guanche name for the new vent was Jedey, after a nearby village, but this was not received favorably. A newer proposal is Tajogaite, after the Guanche name for Montaña Rajada (“Cracked Mountain”), the area directly downhill from the eruption site. This name has since gained wider support.

An earthquake swarm started under Cumbre Vieja on 11 September 2021. It slowly migrated to the surface, with earthquakes of up to around mbLg magnitude 3.5, and more than 22,000 earthquakes were recorded in the space of a week.

At least 40 individuals and some livestock on La Palma were evacuated by authorities due to this warning, although no complete evacuation of the vicinity around the volcano had been declared.

The eruption began at 15:13 local time (14:13 UTC) on 19 September 2021 in a forested area called “Cabeza de Vaca”, of Montaña Rajada, in the Las Manchas section of the municipality of El Paso.

Around 300 people from the local area were evacuated shortly after the eruption, and then a further 700 people (including 500 tourists) were evacuated from the Los Llanos de Aridane coastal region in case the lava flowed to the sea and cut off the main access roads. The total number of evacuees is now estimated to be 5,000 to 10,000.

The eruption takes place from at least five main vents. The alert level was raised to its highest level—red—due to the eruption.

On the fourth day, according to the Volcanological Institute of the Canary Islands, the volcano entered a more explosive phase, expelling less volcanic gas.

On the afternoon of 19 September, the Emergency Committee of the General Hospital of La Palma suspended all non-urgent surgeries, outpatient consultations, and patient visits, with exceptions in the latter case, as a preventive measure to guarantee the hospital’s capacity to attend in the event that it was required due to the eruption. The hospital resumed normal operations the following day.

On the morning of 20 September, the Canarian Ministry of Education ordered the suspension of all classes in the schools of the nearby municipalities of El Paso, Los Llanos de Aridane, and Tazacorte. That same morning, direct flights to the island of La Gomera were suspended but were restored a few hours later.

The day before, the public company in charge of civil air navigation and civil airports in Spain, ENAIRE, together with Eurocontrol, activated the action procedure for volcanic ash but assured the public that air traffic over the Canary Islands was not affected.

On 20 September, around two hundred houses have been destroyed by the flow, according to local authorities. No casualties were reported and flights continued into the islands.

In the early afternoon of 21 September, the lava reached the neighborhood of Todoque, in the municipality of Los Llanos de Aridane, with 1200 inhabitants. At the end of that day, 185 buildings were destroyed, 400 hectares of arable land were burnt and 5500 people were evacuated. Los Campitos public school in Los Llanos de Aridane is among those affected, which was destroyed on Monday 20 September.

On 24 September, the eruptive activity intensified, with further ash and volcanic material falling greater distances, forcing firefighters to withdraw from the neighborhood of the town Todoque. Two new vents have opened in the side of the main cone, outpouring lava.

Authorities have extended the exclusion zone and ordered the evacuation of the neighborhoods of Tajuya, Tacande de Abajo, and Tacande de Arriba in the afternoon. Several civilian airlines have suspended flights to the island due to the ash cloud.

On 25 September, Aena, the operator of the La Palma Airport, had suspended all flights due to ash accumulation with cleaning tasks underway. On the same day, a part of the volcano’s principal cone had collapsed and a new emissive vent had opened to the west of the principal cone (or possibly a previous one that had reopened). The new lava flow followed the previous path, although slightly widening in area.

On 26 September, the previously stalled lava flows started again to advance towards the coast, destroying the Todoque neighborhood church of Saint Pius X and advancing to the sea at a speed of 100 to 200 meters per hour, mostly on top of the older flow.

Meanwhile, the volcano seemed to have entered a more stabilized period after the previous days of more explosive eruptions with a slight fall in seismic activity that took place at deeper depths than before, according to IGN.

On 28 September, at around 23:02 local time (22:02 UTC), the lava flow reached the sea at the Beach of Los Guirres, also called New Beach, of the municipality of Tazacorte. The heating of the seawater to a high temperature might produce laze containing emissions of sulfuric, hydrochloric, and hydrofluoric acid into the air.

Traces of sulfur dioxide emissions from the volcano had been detected in the upper stratosphere as far north as Scandinavia, but the actual impacts of the SO2 emissions on the weather and air quality were said to be globally negligible so far, mostly due to the emitted amounts and their altitude.

Earlier on that day, Spain’s government classified the island of La Palma as a disaster zone, due to the steadily increasing property and economic damage caused by the eruption, a move that will trigger emergency subsidies and other support measures.

The lava flows into the sea created a new lava delta. As of 30 September, this was 20 hectares in size and continuing to grow. It was 27.7 hectares by 2 October. The new land is claimed by the Spanish Government.

On 1 October, a new vent opened, the third in addition to the main crater. This emitted two streams of lava that cut the important LP2 highway and threatened more of the populated area of Los Llanos de Aridane. The total amount of lava emitted since the eruption began was by now estimated to be at least 80 million cubic meters.

On 4 October, the main cone of the volcano collapsed, increasing the lava flow.

On 7 October, at 12:17 local time, an earthquake of magnitude 4.3 mbLg was detected on the island at a depth of 35 km. This was the strongest earthquake since the start of the eruption. By the end of the day, the lava had covered 422 hectares of land and the lava delta had grown to cover an area of 38 hectares.

By 8 October, according to the Copernicus Emergency Mapping Service, the lava flow has affected 497 hectares of land and more than 1100 buildings have been destroyed.

On 9 October, part of the north face of the volcano collapsed, causing the lava within the crater to spill out. Three new lava streams were formed.

On 10 October, large chunks of red-hot magma the size of three-story buildings rolled down, and one of the new lava streams reached Callejón de la Gata, an industrial area of Los Llanos de Aridane, and destroyed what was left of the town of Todoque.

On 11 October, the northern side of the volcanic crater collapsed creating a new lava flow that threatened another urban district known as La Laguna.

By 12 October, the lava flow had covered over 595 hectares. A fire at a cement factory and the risk of lava affecting more factories and warehouses in an industrial area led to the confinement of 3500 people in El Paso and Los Llanos de Aridane, with the northern lava flow around 300 meters from the sea. A magnitude 4.1 earthquake also occurred at a depth of 11 kilometers.

On 13 October, the strongest earthquake since the start of the earthquake storm was felt across the island, with a magnitude of 4.4 at a depth of 36km.

On 14 October, the northern lava flow entered La Laguna destroying a football pitch and a supermarket, as well as other buildings. By 15 October, further evacuations of regions that might be affected by the lava flow meant that nearly 7,000 people had been displaced, and the lava flow covered over 670 hectares.

On 17 October, the advance of the lava flows had slowed. There are plans to rescue five dogs who are trapped in a water tank between lava flows, although it was confirmed that one of them has died. The rescue involves a specialist company, and the use of drones that usually transport cargo to ships in Gibraltar.

By the evening, though, the lava flows reactivated, and it is expected that the second one of them will reach the sea shortly. Another earthquake of magnitude 4.6 occurred below Mazo.

Meanwhile, 4,500 children went back to school again for the first time in 30 days, despite the volcanic eruption and COVID-19, with students from Los Campitos and Todoque relocated to a building in Los Llanos.

The lava flows have also impacted industrial structures such as cement plants, which have also caused gas clouds and explosions, and have affected flights at Tenerife North–Ciudad de La Laguna Airport.

The Cabeza de Vaca area is northwest of the two 1949 eruptive centers, San Juan and Duraznero. During the 1949 eruption, fault displacements also had westward components with movement down the volcano’s flanks.

The last subaerial eruption in Spain, also on La Palma, was the 1971 Teneguía eruption, which asphyxiated a nearby photographer with its fumes.

The eruption also caused some property damage to roads, crops, and homes. The last eruption of any kind in the Canaries was the 2011–2012 El Hierro eruption of a submarine volcano.