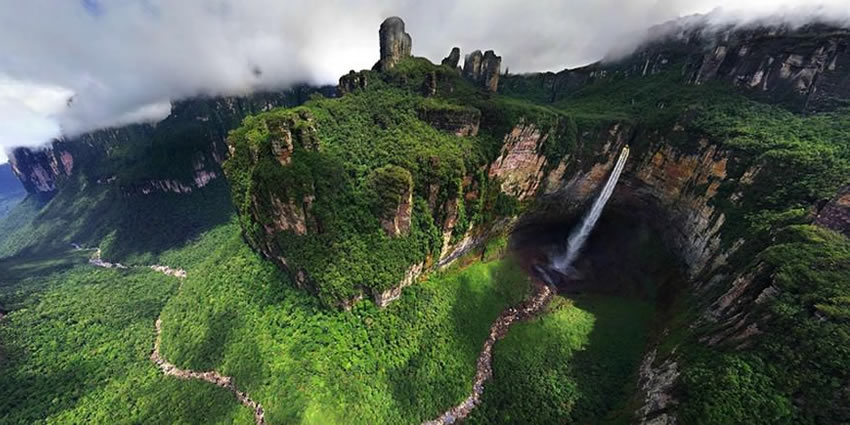 Churún Merú is a powerful sheer plunge-style waterfall found in a narrow alcove at the southern end of the massive canyon which bisects Auyan Tepui from north to south. The falls burst out of a narrow slot canyon and fall for an estimated 1,300 feet or so, with a neighboring stream plunging slightly further during the wet season. Because this part of the canyon is currently too remote and no trails exist in the area the falls have not been properly measured and may actually turn out to be a bit smaller than has been estimated.

This waterfall was likely discovered in the 1930s when much of the area was surveyed for mining, and it may have been discovered by James Angel who is usually (and improperly) credited with discovering Angel Falls. What lends to this idea is that Angel Falls (Kerepakupai Merú) has frequently been incorrectly referred to as Churún Merú and whatever the source of this information was, it persisted for several decades.

The names of both this waterfall and neighboring Churún Vena have caused an inordinate amount of confusion, with both names frequently being improperly used to reference Angel Falls which is found about 6km to the north. The meaning of “Churún” is not immediately known, but one source suggests it may translate roughly to something like “Dragon” or “Monster”. The words Merú and Vena are both used to refer to waterfalls in the native Pemon language, but the distinction between the two (whether there is one) is not known.