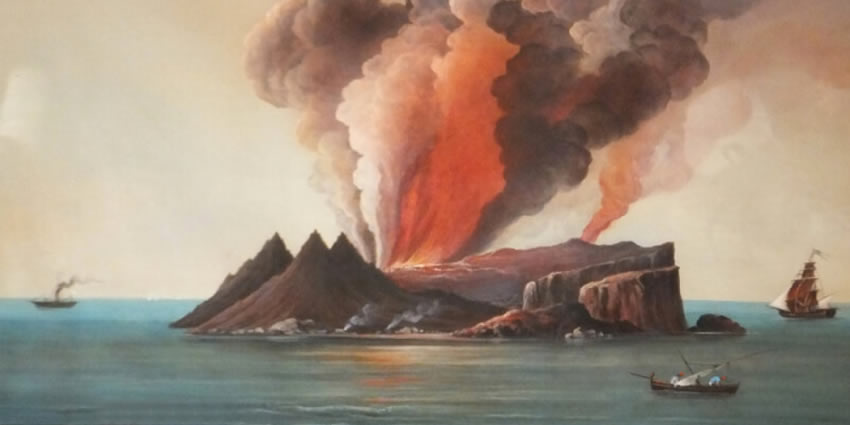 Ferdinandea island is a certain volcanic island in the Mediterranean Sea near the island of Sicily that on more than one occasion has historically first risen above the Mediterranean via volcanic action, and then soon thereafter been washed away. Since 300 BC this cycle of events has occurred with this island four times.

Other names are Graham Island, Graham Bank, or Graham Shoal, and also Julian Island in French.

The top of the island is presently 20 feet below sea level. The island’s most recent “appearance” occurred in July 1831, but then by January 1832, the portion of the island above sea level had been entirely washed away again by the wind and the waves of the Mediterranean Sea.

The 1831 version of the island was first visited by the Sicilian customs official Michele Fiorini on 17 July 1831, who planted an oar there to claim the newly emerged island for the Kingdom of Sicily.

On 2 August 1831 Humphrey Fleming Senhouse, the captain of the first-rate Royal Navy ship of the line St Vincent named the island after Sir James Graham, the First Lord of the Admiralty, and claimed the island for the United Kingdom.

In 1831, during the brief 6-month lifespan of the island, a four-way dispute over the island’s sovereignty arose, which was still unresolved when the island again disappeared beneath the waves in early 1832.

The island is a part of the underwater volcano Empedocles, 30 km south of Sicily, which is one of a number of submarine volcanoes known as the Campi Flegrei del Mar di Sicilia. Seamount eruptions have raised it above sea level several times before erosion submerged it again.

During its brief life in 1831, French geologist Constant Prévost was on hand, accompanied by an artist, to witness it in July 1831; he named it Île Julia, for its July appearance, and reported in the Bulletin de la Société Géologique de France.

Some observers at the time wondered if a chain of mountains would spring up, linking Sicily to Tunisia and thus upsetting the geopolitics of the region. It showed signs of volcanic activity in 2000 and 2002, forecasting a possible appearance; however, as of 2016 it remains 6 m under sea level.

Volcanic activity at Ferdinandea island was first recorded during the First Punic War during the 3rd century BC. The island is believed to have appeared and disappeared four or five times since then. Several eruptions have been reported since the 17th century AD.

The island is located in a volcanic area known as the Campi Flegrei del Mar di Sicilia (Phlegraean Fields of the Sea of Sicily), in between Sicily and Tunisia in the Mediterranean Sea. Many submarine volcanoes (seamounts) exist in the region, as well as some volcanic islands such as Pantelleria.

1831 eruption and competing claims of sovereignty

Ferdinandea island’s most recent appearance as an island was in July 1831. The first reports of high seismic activity and/or eruptions occurred during a period spanning from 28 June to 10 July 1831. These reports came from the nearby town of Sciacca.

On 4 July an odor of sulfur spread through the town reportedly in such quantities that it blackened silver. On 13 July, a column of smoke was clearly seen from St. Domenico. The residents believed it to be a ferry on fire.

On the same day, the brig Gustavo passed through the area, confirming a bubbling in the sea that the captain thought was a sea monster. Another ship reported dead fish floating in the water.

By 17 July, a fully grown islet had formed enough to where Sicilian customs official Michele Fiorini was able to land there and to claim the island for the Kingdom of Sicily.

On 2 August 1831, Humphrey Fleming Senhouse, the captain of the first-rate Royal Navy ship of the line HMS St Vincent claimed the Island for the British Crown and named it after Sir James Graham, the First Lord of the Admiralty.

The eruptions of 1831 resulted in the island increasing in size to about four sq km. However, it was composed of loose tephra, easily eroded by wave action, and when the eruptive episode ended it rapidly subsided, disappearing beneath the waves in January 1832, before the issue of its sovereignty could be resolved.

Fresh eruptions in 1863 caused the island to reappear briefly before again sinking below sea level. At its maximum (in July and August 1831), it was 4,800 m in circumference and 63 m in height. It sported two small lakes, the larger of which was 20 meters in circumference and 2 m in depth.

In the months ahead, Ferdinandea island eventually became the subject of a four-way dispute over its sovereignty, the island had been claimed for the United Kingdom and given the name Graham Island. The King of the Two Sicilies, Ferdinand II, after whom Sicilians named the island Ferdinandea, also sent ships to the nascent island to claim it for the Bourbon crown.

The French Navy made a landing and called the island Julia. Spain also declared its territorial ambitions.[citation needed] Each wanted the island for its useful position in the Mediterranean trade route (to England and France) and its close position to Spain and Italy.

In August 1831, the volcano had risen to above sea level. Although still only a couple of rocks, the Royal Navy thought it was very suitable as a base to control the traffic in the Mediterranean, as it was closer to the European continent than the island of Malta.[2] The British fleet landed, named it Graham Island, after Sir James Graham, the First Lord of the Admiralty, and planted their flag, the Union Jack.

The King of Sicily also realized its strategic significance and dispatched the corvette Etna to claim the new land and dub it Ferdinandea in honor of King Ferdinand II.

Last on the scene was Constant Prévost, a co-founder of the French Geological Society, who compared the eruption to a bottle of champagne being uncorked. He named the island Julia, because it was born in July, and probably also in reference to France’s July Monarchy.

Diplomatic disputes over the island’s status ensued. For five months, conflicting claims of sovereignty raged in newspapers and elsewhere as the four different nations vied for control over a roughly 60-meter-high piece of basalt.

The mysterious island that France, Italy, and England contested for four months

Throughout history, territorial disputes have been the origin of many armed conflicts. However, none would have been as absurd as the one that was about to cause Graham Island (or also called, as we will now explain, Julia Island or Ferdinandea Island) a small extension of just 1.6 square kilometers that only existed for six months.

It all happened in 1831, when the Empedocles, a large underwater volcano located 30 kilometers south of Sicily and whose peak is located a few meters from the surface erupted and the lava expelled by the volcanic cone formed a small islet.

On August 2, when the materials that made up the island, which had four kilometers of coastline, a maximum height of 60 meters and two inland lakes, had barely finished cooling, the English captain Humphrey Fleming Senhouse had already set sail from Malta to plant the British flag on the rock and baptize it with the name of Graham Island.

Just two weeks later, on August 17, a ship of King Ferdinand II of the Two Sicilies, which years later would become part of Italy, arrived on the island to lower the British flag and claim its sovereignty, changing its name to the Ferdinandea Island.

Finally, on September 29, a French scientific mission planted its flag on the islet and baptized it with the name of Ile Julia.

This situation was about to create a serious conflict between the three states that claimed the sovereignty of the islet. However, nature prevented an escalation of tension, since the island disappeared engulfed by the sea on December 17 of that same year. The lava that the volcano spewed was composed of easily erodible material and the action of the waves wore it down in just six months.

This islet once again starred in a curious event more than a century and a half after its disappearance under the waters. In April 1986, the US Air Force bombed Libya in retaliation for a bomb blasting a Berlin nightclub frequented by soldiers from its army.

While carrying out the operation, the planes detected a mysterious shadow under the sea south of Sicily, which they identified as submarines of the Gaddafi regime. After bombarding them, they discovered that they were the remains of this island, which, even after it has disappeared, seems marked by conflict.

During the island’s brief lifespan tourists began to travel to the island to see its two small lakes. Sailors watched it when passing by, and nobles of the House of Bourbon reportedly planned to set up a holiday resort on its beaches. None of these ideas came to fruition, however, as the island soon sank back beneath the waters. By 17 December 1831, officials reported no trace of it. As dynamically as the seamount appeared, it disappeared, defusing the conflict with it.

After 1863, the volcano lay dormant for many decades, its summit just 8 m below sea level. In 2000, renewed seismic activity around Ferdinandea island led volcanologists to speculate that a new eruptive episode could be imminent, and the seamount might once again become an island. In November 2002 the Institute of Geophysics and Volcanology in Rome observed minor seismic activity and gas emissions.

They put the time of resurfacing at a couple of weeks or months. Italian sailors put an Italian flag on the top of the bank to avoid other nations’ claims if the former island resurfaced. Despite showing signs in both 2000 and 2002, the seismicity did not lead to volcanic eruptions, and as of 2006 Ferdinandea’s summit remains about 8 meters below sea level.

To forestall a renewal of the sovereignty disputes, Italian divers planted a flag on the top of the volcano in advance of its expected resurfacing. To bolster their case, Sicilians, who call it Ferdinandea, summoned the descendant of the Bourbon King of Naples.

In a ceremony filmed by a flotilla of camera crews, Prince Carlo di Bourbon lowered a plaque into the waves and told cheering locals: “It will always be Sicilian.”

Lobbied by fishermen and sailors, Ignazio Cucchiara, the mayor of Sciacca, invited Prince Carlo to attend the ceremony with his wife, The Duchess of Castro Camilla Crociani. To accommodate television crews the plaque was lowered well before reaching the shoal, which is a danger to shipping. Choppy waters forced divers to postpone the operation a week, until 13 November 2000.

The diving crew planted Sicily’s flag, which features a Medusa’s head surrounded by three naked legs – a sign traditionally interpreted as “keep away.”

The marble plaque, weighing 150 kg, was inscribed “This piece of land, once Ferdinandea, belonged and shall always belong to the Sicilian people.”[citation needed] The Prince told cheering locals: “It will always be Sicilian.” But within six months, it had been fractured into twelve pieces, mostly likely by fishing gear but possibly by vandalism.

The sudden geologic phenomenon was observed and studied by numerous scientists.
In 2006, further study revealed Ferdinandea island to be just one part of the larger volcanic cone Empedocles.

The island/ reef is still referenced on marine charts, as its top is only 6 meters (20 feet) short of breaking the surface, it thus becomes a potentially dangerous hidden obstacle for many seafaring vessels whose keels most often run deeper than this. It is also a small shoal on which near-surface maritime creatures dwell.

During its emergence, it was visited by Sir Walter Scott, and it provided inspiration for James Fenimore Cooper’s The Crater, or Vulcan’s Peak, Alexandre Dumas, père’s The Speronara, Jules Verne’s Captain Antifer and The Survivors of the Chancellor, and Terry Pratchett’s Jingo (novel).