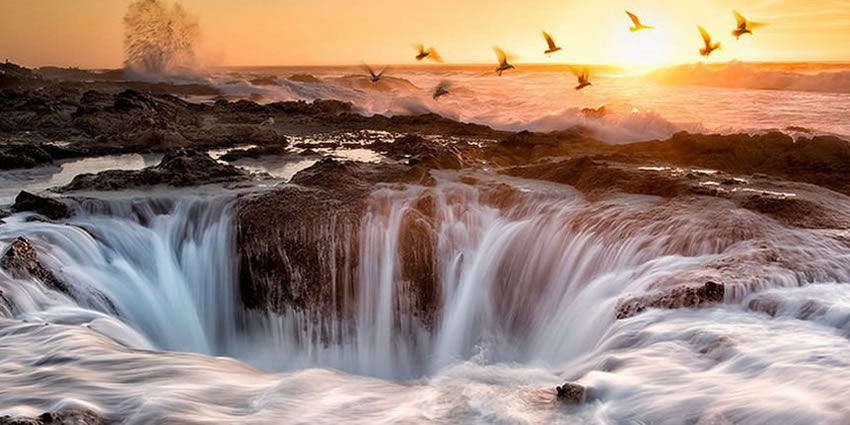 Thor’s Well is an interesting, albeit treacherous, feature of the wild Oregon coast.

Sitting on the edge of the Oregon coast is what appears to be a gaping sinkhole that never seems to fill despite the unbroken stream of seawater that drains into it, but Thor’s Well, as the natural wonder is known, is not bottomless, but it is very dangerous.

In reality, the huge hole is likely only around 6 meters deep. Even if the well is not quite as magic as it seems, it still manages to produce amazing sights but is not for the faint of heart.

Thor’s Well is a bowl-shaped hole carved out of the rough basalt shoreline. Likely started out as a sea cave dug out by the waves before the roof eventually collapsed, leaving openings at the top and bottom through which the ocean surges and sprays.

Circular shape aside, it’s not so different from the other features around it but its shape and location, right against the Pacific Ocean, resulting in some pretty unusual behavior.

The site is said to be most spectacular at high tide, or during storms. At high tide, the waves roll underneath the bowl, filling it from the bottom until it bubbles out the top or bursts up in a violent spray.

The water then rolls back into the hole, making Thor’s Well appear to fill and drain endlessly. It’s fun to watch when the ocean is high but return at low tide to see the mechanisms at work.

Nobody can tell when an unexpectedly ginormous wave will come surging past the well, knocking down anyone who might be in the way and dragging them out to sea.

During these sudden torrents, unsuspecting visitors to the site run the risk of being swept right into the maelstrom. Despite its reputation,

Thor’s Well isn’t particularly dangerous, all people who have been hit by sneaker waves while looking at the feature. They didn’t get sucked into the hole but got plenty of scrapes and cuts against the sharp volcanic rock.