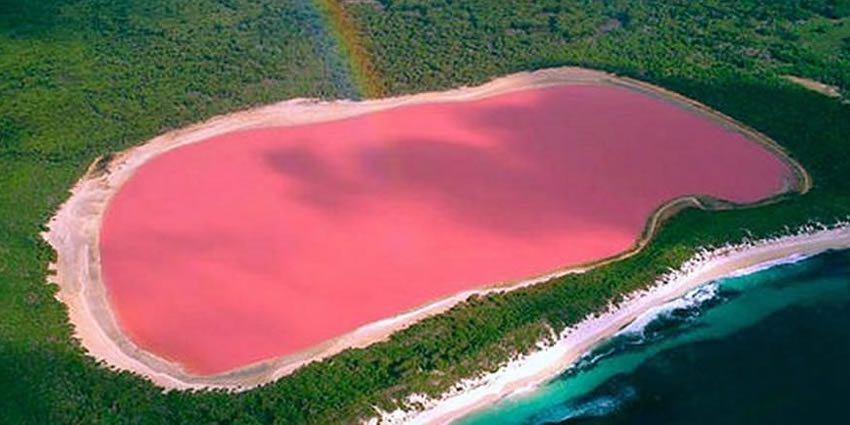 Lake Hillier is a saline lake on the edge of Middle Island, the largest of the islands and islets that make up the Recherche Archipelago in the Goldfields-Esperance region, off the south coast of Western Australia.

Lake Hillier is about 600 meters in length by about 250 m in width. The lake is surrounded by a rim of sand and a dense woodland of paperbark and eucalyptus trees with a narrow strip of sand dunes covered by vegetation separating it from the ocean.

The most notable feature of the lake is its pink color. The vibrant color is permanent and does not alter when the water is taken in a container. The pink color is considered to be due to the presence of the organism Dunaliella salina.

Lake Hillier was visited by the Matthew Flinders expedition on 15 January 1802. Flinders’ journal entries are considered to be the first written records of the lake. Flinders observed the pink lake after ascending the island’s highest peak (now called Flinders Peak), describing the lake as follows:

In the north-eastern part was a small lake of a rose color, the water of which, as I was informed by Mr. Thistle who visited it, was so saturated with salt that sufficient quantities were crystallized near the shores to load a ship. The specimen he brought on board was of good quality and required no other process than drying to be fit for use.

Flinders visited Middle Island again in May 1803. He intended to stop a day or two in Goose-Island Bay, for the purposes of procuring geese for our sick people, seal oil for our lamps, and a few casks of salt from the lake on Middle Island.

It is reported that Flinders subsequently named the lake after William Hillier, a crew member of Investigator who died of dysentery on 20 May 1803 prior to the expedition’s departure from Middle Island.

In 1889, Edward Andrews investigated the commercial possibilities of producing salt from Lake Hillier, and briefly moved onto the island with both of his sons. They left after working the salt deposits for about one year.

The lake was subject to salt mining during the late 19th century. The salt mining enterprise is reported as failing for a number of reasons including “the toxicity of the salt collected for consumption”.

As of 2012, the lake is part of the protected area known as the Recherche Archipelago Nature Reserve and is the feature of a recreational walking trail that circumnavigates its shoreline.

The only living organisms in Lake Hillier are microorganisms including Dunaliella salina, which causes the salt content in the lake to create a red dye which helps produce the color, as well as red halophilic bacteria present in the salt crusts.

Despite the unusual hue, the lake exhibits no known adverse effects upon humans. From above, the lake appears a solid bubble gum pink, but from the shoreline, it appears more of a clear pink hue. The shoreline is also covered in salt crust deposits.

Despite the high salt content levels (comparable to those of the Dead Sea), Lake Hillier is safe to swim in.

As recently as 2012, Lake Hillier has been located within the boundaries of the Recherche Archipelago Nature Reserve. Since 2002, the lake itself has been considered to be a wetland of “subregional significance”.

However, there are very few ways to reach Lake Hillier. The helicopter is one of the most common methods of travel for viewing the lake.

Cruises are also an option for passengers wanting to visit the isolated lake and surrounding forest area.