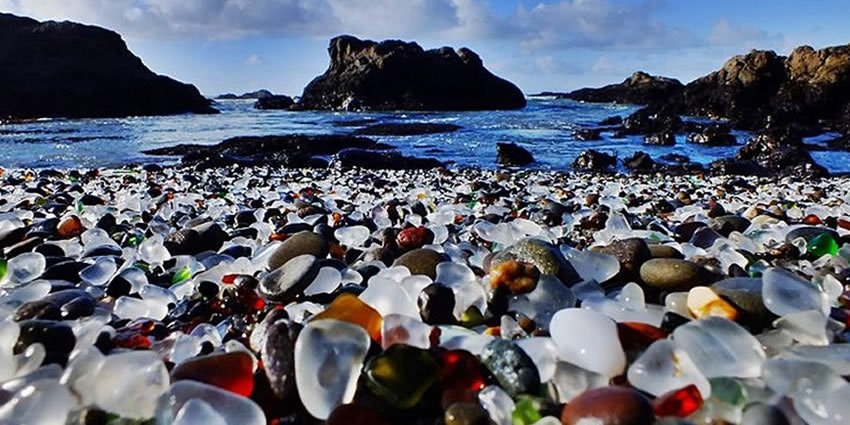 Glass Beach is a beach in MacKerricher State Park near Fort Bragg, California that is abundant in sea glass created from years of dumping garbage into an area of coastline near the northern part of the town.

In 1906, Fort Bragg residents established an official water dump site behind the Union Lumber Company onto what is now known as “Site 1”. Most water-fronted communities had water dump sites discarding glass, appliances, and even vehicles. Locals referred to it as “The Dumps.” Fires were often lit to reduce the size of the trash pile.

The California State Water Resources Control Board and city leaders closed this area in 1967. Various cleanup programs were undertaken through the years to correct the damage. Over the next several decades, what was biodegradable in the dumpsites simply degraded and all the metal and other items were eventually removed and sold as scrap or used in art.

The pounding waves broke down the glass and pottery and tumbled those pieces into the small, smooth, colored pieces that often become jewelry quality and that cover Glass Beach and the other two glass beaches (former dump sites) in Fort Bragg.

These sites are accessible by foot and by a short climb down the cliffs surrounding the beach. Site One (1906–43) is 1/4 mile south of Site Two and has become accessible by foot as of January 2015 when the northern section of the new Coastal Trail in Fort Bragg opened.

In 1998, the private owner of the property began a five-year process of working with the California Coastal Conservancy and the California Integrated Waste Management Board for the cleanup and sale of the property to the state. Following completion of the clean-up, the California Department of Parks and Recreation purchased the 38-acre (15 ha) Glass Beach property, and it was incorporated into MacKerricher State Park in October 2002.

Sites 1 & 2 are located south of “Glass Beach” and do not abut the state park area, though they abut the new city park area, which also ends at the mean high water mark (MHW).

The beach is now visited by tens of thousands of tourists yearly. Collecting is discouraged on the section of “Glass Beach” within and adjacent to the state park, although most of the sea glass is now found on the other two glass beaches outside the state park area.

About 1,000 to 1,200 tourists visit Fort Bragg’s glass beaches each day in the summer. Most collect some glass. Because of this and also because of natural factors (wave action is constantly grinding down the glass), the glass is slowly diminishing.

There is currently a movement by Captain J. H. (Cass) Farrington to replenish the beaches with discarded glass. On December 10, 2012, the City Council of the City of Fort Bragg, discussed the beach glass depletion and declined to move forward with replenishment efforts due to the cost and perceived likelihood that required permits would not be approved.

Similar beaches are found at Benicia (California) and Hanapepe (Hawaii).