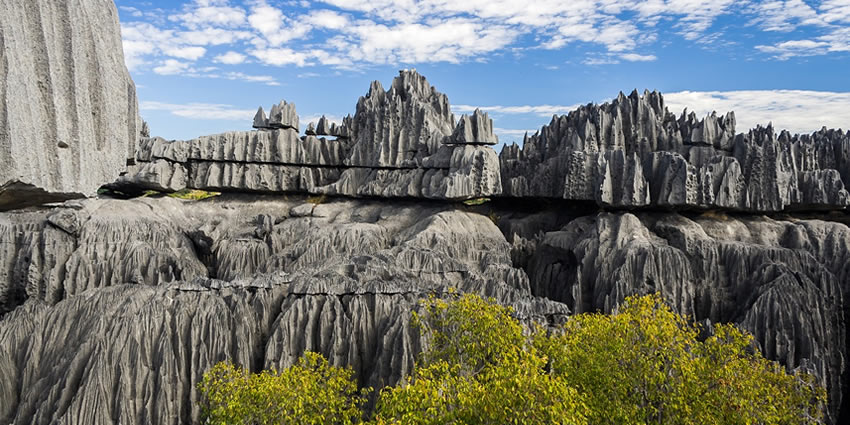 The Tsingy de Bemaraha is a UNESCO World Heritage site and one of Madagascar’s must-see attractions.

This is the world’s largest stone forest, where high spiked towers of eroded limestone tower over the greenery. This is an almost impenetrable limestone labyrinth of spiky, grey rocks, formed over millennia of erosion by wind and water.

Tsingy is a Malagasy word that means “walk on tiptoes” and refers to the razor-sharp peaks of the rocks that would be difficult to navigate without the man-made walkways and bridges that traverse the geological wonder.

Travelers are always amazed at the unique formations and the animals that call the unlikely environment their home. Isolated and inhospitable, this huge collection of razor-sharp vertical rocks looks like the last place where wildlife would thrive.

The origins of the Tsingy started some 200 million years ago when a thick limestone bed formed at the bottom of a lagoon by layers of calcite.

Tectonic activity pushed this bed upwards and falling sea levels allowed the stone plateau to be exposed to the elements which eventually eroded the massif into the Tsingy we see today.

The peaks and points and wavy edges of the towering limestone karsts look more like a scene from a sci-fi film than anything one would expect to come across while exploring an African island known for its jungles and beaches.

But this seemingly inhospitable landscape is home to 11 different species of lemur such as Decken’s Sifaka, fat-tailed dwarf lemur, and grey mouse lemur, some lemur species that are only found here are Cleese’s woolly lemur and the Sambirano lesser bamboo lemur.

The stone forest is also home to deciduous dry forests that are well adapted to the extreme conditions of the environment, as well as dense tropical forests in the deep canyons that are known for sweltering humidity.

The Tsingy is also interspersed by rivers and caves, providing a variety of scenery to enjoy. Covering an area of 1.575 square km it is a wonder to explore and there is enough to marvel at to even take 2-3 days to discover it all.

As it is a rather adventurous activity exploring the limestone labyrinth, climbing ladders and crossing suspended swing bridges, and at some points even strapped to a harness, it is recommended that travelers have a moderate level of fitness.