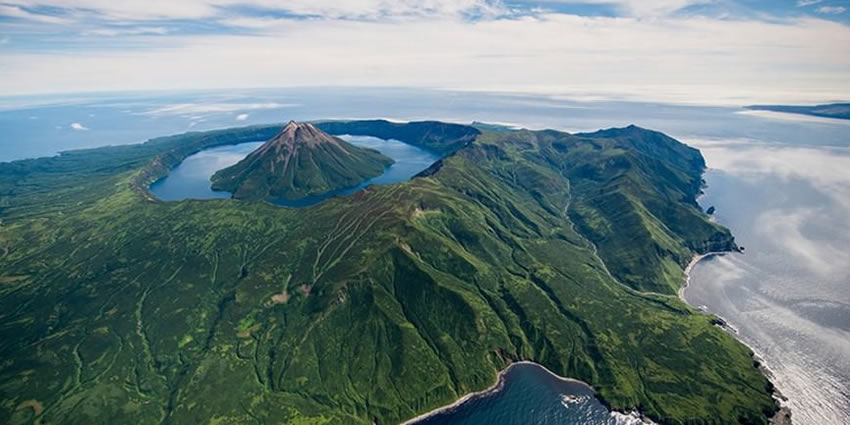 This small “island” in the middle of the “lake” is a volcano inside a lake situated in another volcano crater on Onekotan Island.

Onekotan Island is an uninhabited volcanic island located near the northern end of the Kuril Islands chain in the Sea of Okhotsk in the northwest Pacific Ocean. Its name is derived from the Ainu language for “large village”.

The Onekotan Island is roughly rectangular, with a length of 42.5 kilometers, and a width ranging from 11 kilometers to 17 kilometers. It has an area of 425 km².

The island consists of two stratovolcanos connected by a relatively flat isthmus.

Onekotan still has an active volcano with the most recent eruption, in 1952, forming a small lava dome on the island’s coast.

There are chars in Lake Chyornoye, one of the two lakes on Onekotan, located at the northern end of the island.

The Onekotan Island, with a number of shallow bays and sandy beaching providing landing points, was inhabited by the Ainu prior to European contact. It appears on an official map showing the territories of Matsumae Domain, a feudal domain of Edo period Japan dated 1644, and these holdings were officially confirmed by the Tokugawa shogunate in 1715.