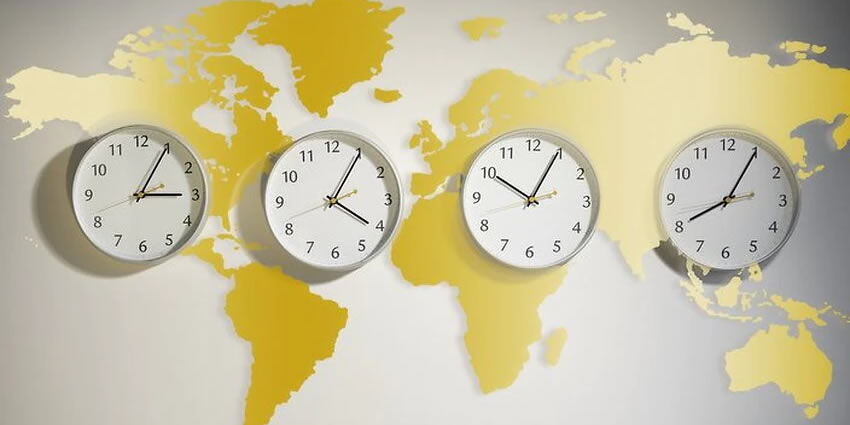 A time zone is an area that observes a uniform standard time for legal, commercial, and social purposes. Time zones tend to follow the boundaries between countries and their subdivisions instead of strictly following longitude because it is convenient for areas in frequent communication to keep the same time.

All time zones are defined as offsets from Coordinated Universal Time (UTC), ranging from UTC−12:00 to UTC+14:00. The offsets are usually a whole number of hours, but a few zones are offset by an additional 30 or 45 minutes, such as in India and Nepal.

Some areas of higher latitude use daylight saving time for part of the year, typically by adding one hour to local time during spring and summer.

The apparent position of the Sun in the sky, and thus solar time, vary by location due to the spherical shape of the Earth. This variation corresponds to four minutes of time for every degree of longitude, so for example when it is solar noon in London, it is about 10 minutes before solar noon in Bristol, which is about 2.5 degrees to the west.

The Royal Observatory, Greenwich, founded in 1675, established Greenwich Mean Time (GMT), the mean solar time at that location, as an aid to mariners to determine longitude at sea, providing a standard reference time while each location in England kept a different time.

In the 19th century, as transportation and telecommunications improved, it became increasingly inconvenient for each location to observe its own solar time. In November 1840, the Great Western Railway started using GMT kept by portable chronometers. This practice was soon followed by other railway companies in Great Britain and became known as Railway Time.

Around August 23, 1852, time signals were first transmitted by telegraph from the Royal Observatory. By 1855, 98% of Great Britain’s public clocks were using GMT, but it was not made the island’s legal time until August 2, 1880. Some British clocks from this period have two-minute hands, one for the local time and one for GMT.

On November 2, 1868, the then British Colony of New Zealand officially adopted a standard time to be observed throughout the colony. It was based on longitude 172°30′ east of Greenwich, which is 11 hours 30 minutes ahead of GMT. This standard was known as New Zealand Mean Time.

Timekeeping on North American railroads in the 19th century was complex. Each railroad used its own standard time, usually based on the local time of its headquarters or most important terminus, and the railroad’s train schedules were published using its own time. Some junctions served by several railroads had a clock for each railroad, each showing a different time.

Charles F. Dowd proposed a system of hourly standard time zones for North American railroads around 1863, although he published nothing on the matter at that time and did not consult railroad officials until 1869. In 1870 he proposed four ideal time zones having north-south borders, the first centered on Washington, D.C., but by 1872 the first was centered on meridian 75° west of Greenwich, with natural borders such as sections of the Appalachian Mountains.

Dowd’s system was never accepted by North American railroads. Instead, U.S. and Canadian railroads implemented a version proposed by William F. Allen, the editor of the Traveler’s Official Railway Guide. The borders of its time zones ran through railroad stations, often in major cities.

For example, the border between its Eastern and Central time zones ran through Detroit, Buffalo, Pittsburgh, Atlanta, and Charleston. It was inaugurated on Sunday, November 18, 1883, also called “The Day of Two Noons”, when each railroad station clock was reset as standard-time noon was reached within each time zone.

The North American zones were named Intercolonial, Eastern, Central, Mountain, and Pacific. Within a year 85% of all cities with populations over 10,000 (about 200 cities) were using standard time. A notable exception was Detroit (located about halfway between the meridians of Eastern and Central time), which kept local time until 1900, then tried Central Standard Time, local mean time, and Eastern Standard Time (EST) before a May 1915 ordinance settled on EST and was ratified by popular vote in August 1916. The confusion of times came to an end when standard time zones were formally adopted by the U.S. Congress in the Standard Time Act of March 19, 1918.

Italian mathematician Quirico Filopanti introduced the idea of a worldwide system of time zones in his book Miranda!, published in 1858. He proposed 24 hourly time zones, which he called “longitudinal days”, the first centered on the meridian of Rome. He also proposed a universal time to be used in astronomy and telegraphy. However, his book attracted no attention until long after his death.

Scottish-born Canadian Sir Sandford Fleming proposed a worldwide system of time zones in 1879. He advocated his system at several international conferences, and is credited with “the initial effort that led to the adoption of the present time meridians”.

In 1876, his first proposal was for a global 24-hour clock, conceptually located at the center of the Earth and not linked to any surface meridian. In 1879, he specified that his universal day would begin at the anti-meridian of Greenwich (180th meridian) while conceding that hourly time zones might have some limited local use.

He also proposed his system at the International Meridian Conference in October 1884, but it did not adopt his time zones because they were not within its purview. The conference did adopt a universal day of 24 hours beginning at Greenwich midnight, but specified that it “shall not interfere with the use of local or standard time where desirable”.

By about 1900, almost all inhabited places on Earth had adopted a standard time zone, but only some of them used an hourly offset from GMT. Many applied the time at a local astronomical observatory to an entire country, without any reference to GMT. It took many decades before all time zones were based on some standard offset from GMT or Coordinated Universal Time (UTC).

By 1929, the majority of countries had adopted hourly time zones, though some countries such as Iran, India, and parts of Australia had time zones with a 30-minute offset. Nepal was the last country to adopt a standard offset, shifting slightly to UTC+05:45 in 1986.

All nations currently use standard time zones for secular purposes, but not all of them apply the concept as originally conceived. Several countries and subdivisions use half-hour or quarter-hour deviations from standard time. Some countries, such as China and India, use a single time zone even though the extent of their territory far exceeds the ideal 15° of longitude for one hour.

Other countries, such as Spain and Argentina, use standard hour-based offsets, but not necessarily those that would be determined by their geographical location. The consequences, in some areas, can affect the lives of local citizens, and in extreme cases contribute to larger political issues, such as in the western reaches of China. In Russia, which has 11 time zones, two time zones were removed in 2010 and reinstated in 2014.

Since the 1920s, a nautical standard time system has been in operation for ships on the high seas. As an ideal form of the terrestrial time zone system, nautical time zones consist of gores of 15° offset from GMT by a whole number of hours. A nautical date line follows the 180th meridian, bisecting one 15° gore into two 7.5° gores that differ from GMT by ±12 hours.

However, in practice, each ship may choose what time to observe at each location. Ships may decide to adjust their clocks at a convenient time, usually at night, not exactly when they cross a certain longitude. Some ships simply remain on the time of the departing port during the whole trip.

Ideal time zones, such as nautical time zones, are based on the mean solar time of a particular meridian located in the middle of that zone with boundaries located 7.5 degrees east and west of the meridian. In practice, however, many time zone boundaries are drawn much farther to the west, and some countries are located entirely outside their ideal time zones.

For example, even though the Prime Meridian (0°) passes through Spain and France, they use the mean solar time of 15 degrees east (Central European Time) rather than 0 degrees (Greenwich Mean Time). France previously used GMT but was switched to CET (Central European Time) during the German occupation of the country during World War II and did not switch back after the war.

Similarly, prior to World War II, the Netherlands observed “Amsterdam Time”, which was twenty minutes ahead of Greenwich Mean Time. They were obliged to follow German time during the war and kept it thereafter. In the mid-1970s the Netherlands, as other European states, began observing daylight saving (summer) time.

One reason to draw time zone boundaries far to the west of their ideal meridians is to allow the more efficient use of sunlight. Some of these locations also use daylight saving time (DST), further increasing the difference to local solar time. As a result, in summer, solar noon in the Spanish city of Vigo occurs at 14:41 clock time.

This westernmost area of continental Spain never experiences sunset before 18:00 clock time, even in winter, despite lying 42 degrees north of the equator.[34] Near the summer solstice, Vigo has sunset times after 22:00, similar to those of Stockholm, which is in the same time zone and 17 degrees farther north. Stockholm has much earlier sunrises, though.

A more extreme example is Nome, Alaska, which is at 165°24′W longitude – just west of the center of the idealized Samoa Time Zone (165°W). Nevertheless, Nome observes Alaska Time (135°W) with DST so it is slightly more than two hours ahead of the sun in winter and over three in summer. Kotzebue, Alaska, also near the same meridian but north of the Arctic Circle, has two sunsets on the same day in early August, one shortly after midnight at the start of the day, and the other shortly before midnight at the end of the day.

China extends as far west as 73°E, but all parts of it use UTC+08:00 (120°E), so solar “noon” can occur as late as 15:00 in western portions of China such as Xinjiang. The Afghanistan-China border marks the greatest terrestrial time zone difference on Earth, with a 3.5-hour difference between Afghanistan’s UTC+4:30 and China’s UTC+08:00.

Many countries, and sometimes just certain regions of countries, adopt daylight saving time (DST), also known as summertime, during part of the year. This typically involves advancing clocks by an hour near the start of spring and adjusting back in autumn (“spring forward”, “fall back”).

Modern DST was first proposed in 1907 and was in widespread use in 1916 as a wartime measure aimed at conserving coal. Despite the controversy, many countries have used it off and on since then; details vary by location and change occasionally. Countries around the equator usually do not observe daylight saving time, since the seasonal difference in sunlight there is minimal.